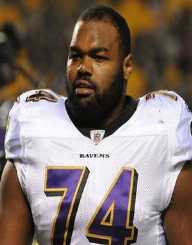 Michael Jerome Oher is a celebrated American football offensive tackle of the National Football League's Carolina Panthers. Oher was born on May 28, 1986, in Memphis, Tennessee. He was born in a broken family and received no care from his parents. His mother was a drug addict while his father was on and off in prison. His father later died in prison while Oher was in High School.

Oher has played college football at the University of Mississippi where he earned All-American honors. The recognition opened many doors of opportunity for him to even play in the National Football League.

Michael Oher was a football star born in Memphis, Tennessee on May 28, 1986, as Michael Jerome Williams Jr. There were twelve children born to Michael Jerome Williams Sr. and Denise Oher who neglected them and offered no support. The father was a frequent prisoner and was killed while in one of the United States prisons, while the mother was addicted to crack cocaine.

As a result, Oher was in-and-out of foster homes and frequently homeless. Oher failed to do well at school due to the challenges at home. He performed poorly as a student, repeating first grade and second grade. As a result, Oher attended eleven different schools during the first nine years of his studies.

He started playing and enjoying football when he joined high school.

Michael Oher faced serious challenges of lack of support from his parents. The negligence affected his academics, and he performed poorly at school. He was forced to change so many schools due to his poor performance.

He joined High School and started enjoying football. As a result, Tony Henderson pushed for his enrollment into the "Briarcrest Christian School". It is at the school where Oher got training on football from coach Hugh Freeze and Tim Long. The training enhanced his skills, and he graduated to Division II (2A) Lineman of the year.

In 2004, Oher was taken up by new foster parents, Leigh Anne and Sean Tuohy, who later adopted him. They offered him the love that he had missed in his childhood. He even started training in sports like basketball and track. He worked diligently as a student, and he managed good grades that earned an admission into a school of Division I of "National Collegiate Athletic Association".

Michael Oher joined the University of Mississipi where he graduated with a degree in Criminal Justice.

Michael Oher got many scholarship opportunities which opened doors for his football career. The scholarships were from Universities such as Alabama, Tennessee, Auburn, South California, and Louisiana State. He made a critical decision to join and play for the University of Mississippi. He got guidance from coach Ed Orgeron. He afterwards began playing for the ‘Ole Miss Rebels' football team. Initially, he played as a guard on the team, and his performance was so impressive that he was named the Freshman All-America.

Oher started off as a guard in ten games during his first season with the Ole Miss Rebels. In 2006, he changed position and started playing the position of left tackle. In the same year, he was named to various preseason All-Conference and All-American teams.

On January 14, 2008, Oher publicly showed his interest in joining the 2008 NFL Draft. He changed his mind after two days and declared his withdrawal from the draft to return to Ole Miss football team for his senior season. After the 2008 season, Oher was recognized as a unanimous first-team All-America honoring him for the second time. Oher acquired a degree in criminal justice from the University in the spring of 2009.

In the same year, he was chosen at the 2009 National Football League Draft by the "Baltimore Ravens". He entered a contract with the team and was given a jersey number seventy-four. In 2009, he played both right and left tackle position. In the 2010 season, he was played the right tackle, and the Ravens won against the ‘New England Patriots' by 33-14. For the following season, he was placed as the right tackle.

Baltimore Ravens played against San Francisco 49ers, and the Ravens won 34-31 in the "Super Bowl XLVII". As a result, Oher won the "Super Bowl Ring", his first ever award in football. In 2014, he signed a contract with the "Tennessee Titans" team.

However, Oher had several injuries that season and made only a few appearances in the field. As a result, his contract was terminated. A year later, he signed another contract with the "Carolina Panthers" and started playing in the position of left tackle.

Michael Oher was honored by Michael Lewis, an author that wrote a book named "The Blind Side: Evolution of a Game" where Oher was the subject. A section of the book was turned into a movie by the same name. The book was released in 2009.

Michael Oher wrote his autobiography named "I Beat The Odds: From Homelessness to The Blind Side and Beyond". The book was written together with an American sports journalist Don Yaeger.