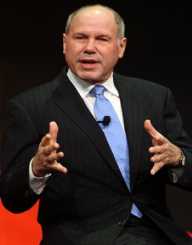 Disney magnate Michael Eisner was born on the 7 March 1942 in Mount Kisco, New York to Leste r Eisner and Margaret Dammann. The couple also had a daughter Margot. As a boy he used to used to attend the Keewaydin Canoe Camp in Vermont.Education
After graduating from The Lawrenceville School, Eisner graduated with a B.A. from Denison University (1964).

Early in his career, Michael Eisner worked as an assistant to the national programming director at ABC and later was appointed a senior vice president in charge of programming. He was then appointed president CEO of Paramount Pictures’ movie studio. During his time there various hit films were produced included Saturday Night Fever, Grease, Ordinary People. An Officer and A Gentleman and Star Trek. Under his leadership television shows produced included Cheers, Family Ties and Happy Days.

Michael Eisner took over as CEO and Chairman of the Board of The Walt Disney Company in 1984. He was also the presenter of The Wonderful World of Disney television show. Under his leadership, Disney produced a series of hit films including Who Framed Roger Rabbit (1988) and The Little Mermaid (1989). Acquisitions during his tenure included Miramax Films. Some Disney theme parks were built notably, Disneyland Paris in Europe and Disney’s California Adventure Park. Eisner resigned his role as CEO in March 2005.

Michael Eisner married Jane Breckenridge in 1967, and they have three children.

The Disney company’s corporate headquarters are named the Team Disney: