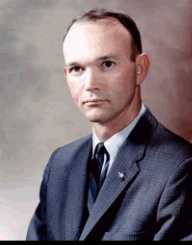 Michael Collins was born on October 31, 1930, in Rome, Italy. His father was a U.S. Army Major General James Lawton Collins. Until he was 17 years old, Collins lived in several countries and states. Collins attended Academia del Perpetuo Socorro in San Juan, Puerto Rico. After the United States entered World War II, his family moved to Washington D.C. there he attended the St. Albans School and graduated in 1948.

Collins’ mother wanted him to pursue a career in the diplomatic service, but he wanted to follow his father’s footsteps and joined the United States Military Academy at West Point. In 1952, Collins graduated with Bachelor of Science degree and decided to join the United States Air Force.

At the Air Force, Collins met his future wife, Patricia Finnegan. Collins was deployed to West Germany in 1956, and the couple married the following year. Later Collins was reassigned back to the United States and attended the aircraft maintenance officer course at Chanute Air Force base in Illinois. After the course, he began to travel to Air Force bases to train mechanics on servicing aircraft. During his service time, Collins accumulated over 1,500 hours of flying, which was the required minimum to enter USAF Experimental Flight Test Pilot School. In 1960 he was accepted into the Class 60-C for training and was chosen for a position in fighter operations.

A turning point in his life occurred in 1962 when the Mercury-Atlas 6 flight circled the Earth in 90 minutes. Collins immediately applied for the second group of that year’s astronauts. Unfortunately, he was not accepted. His workplace became the USAF Aerospace Research Pilot School, and Collins applied for a course into the basics of spaceflight. The same year he once again applied for the astronaut position and was accepted.

Michael Collins took on the 240-hour astronaut training and applied for the spacewalk specialization. In 1965, Collins got his first assignment as the backup pilot for Gemini 7. After completion of this project, Collins was assigned to the prime crew on Gemini 10. In his first extravehicular activity, Collins did not leave the Gemini capsule but stood up through the hatch.

After Gemini 10, Collins was assigned to the backup crew of Apollo 2 mission as the Lunar Module Pilot. Since Apollo 2 mission would just repeat the Apollo 1 flight, it was canceled, and Collins was moved to Apollo 8 prime crew. The Apollo 8 mission was successful, making the first circum-lunar flight in the history. After this, the Apollo 11 mission was announced, and the crew included Collins, Armstrong, and Aldrin.

For the Apollo mission, Collins had completely different training. The team underwent different simulations, including centrifuge training to simulate the 10 g reentry. They also had to be sized for pressure suits. Collins compiled a book of 18 different rendezvous schemes and different scenarios for the lunar module. He also participated in the creating of the famous mission patch of Apollo 11. Collins made the solo flight around the Moon while Armstrong and Aldridge were exploring the lunar surface.

After returning to land, the astronauts went into 18-day quarantine. After this, the crew went on to a 45 day “Giant Leap” tour around the world. Collins was then made the Assistant Secretary of State for Public Affairs. Collins retired from NASA in 1970, and the following year he was appointed the director of the National Air and Space Museum. He held the position until 1978 when he became the undersecretary of the Smithsonian Institution.

Collins has also written several books. His autobiography Carrying the Fire: An Astronaut’s Journeys is regarded as one of the best books about how it is to be an astronaut. He also wrote the books Liftoff: The Story of America’s Adventure in Space (1988) and Mission to Mars (1990). Collins also paints with watercolors, mostly related to his home in Florida Everglades and space-related. In 2008, Collins was inducted into the Aerospace Walk of Honor, as well as being an inductee of the U.S. Astronaut Hall of Fame.