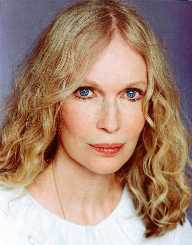 Life Is About Losing Everything, Gracefully: Mia Farrow

Born María De Lourdes Villiers Farrow, American actress, activist and one-time fashion model, Mia Farrow was born on February 9, 1945, in Los Angeles, California, United States of America. She was the third child and eldest daughter of the seven children of her parents. Her father John Villiers Farrow was an Australian born writer-director though his family was initially from England. Her mother was the famous Irish actress and Tarzan-girl Maureen O'Sullivan. Out of Mia’s six siblings, her eldest brother Michael Farrow died in a plane accident in 1958 in his late teens. The second eldest brother Patrick Farrow, who became a sculptor, committed suicide in 2009. She had a younger brother John Charles and three younger sisters - Prudence, Stephanie, and Tisa.

Mia Farrow's childhood was spent in Beverly Hills, California. She was raised following Roman Catholic traditions and attended Catholic Convent run by nuns to receive her primary and high school education. She contracted polio at the age of nine and spent three weeks at an isolation ward during an outbreak of polio in Los Angeles which affects nearly 500 people.

Born in a family of film personalities, Mia Farrow appeared in a documentary film ‘Unusual Occupations: Film Tot Holiday’ in 1947 at a very early age of 2 only. She auditioned for the role of Liesl von Trapp in the legendary musical ‘The Sound of Music.’ Though she was not selected, the footage of the audition was conserved and included in the fortieth Anniversary Edition DVD of The Sound of Music. In 1959, she played a small role in her father's film ‘John Paul Jones.’ She made her theatrical debut in 1963 in an off-Broadway production of 'The Importance of Earnest.'

During the 1960s Mia Farrow appeared in supporting roles in several films. Among these films ‘Guns at Batasi’ (1964) was her first credited appearance. In 1964, she started playing the character of ‘Allison MacKenzie’ on the popular primetime soap opera ‘Peyton Place.’ She was associated with the television show for two years and achieved immense popularity before leaving the show in 1966. She also worked as a fashion model before seriously pursuing her acting career.

After leaving the primetime soap opera ‘Peyton Place,’ Mia Farrow got the opportunity to show her acting prowess in the 1968 Roman Polanski directed film ‘Rosemary's Baby.’ She was cast in the leading role of Rosemary, a character of a woman who finds herself surrounded by Satanists and impregnated by the devil. The film, considered to be an exceptional example of classic horror film till date, established her as one of the leading actresses. Mia Farrow amassed various awards for her role in the movie including the Golden Globe Award for New Star of the Year - Actress.

Mia Farrow made a film ‘Secret Ceremony’ in England with Elizabeth Taylor and Robert Mitchum. While shooting for the film, she gathered the information that Henry Hathaway, the director of her forthcoming film ‘True Grit,’ is having the notoriety of being impolite to actresses. She requested the producer Hal Wallis to replace the director. Wallis declined to do so. Mia Farrow quit the cast of ‘True Grit,’ and the role went to Kim Darby. In 1969, she appeared in the title role of the film ‘John and Mary’ opposite Dustin Hoffman. She was nominated for the Golden Globe Award for Best Actress – Motion Picture Musical or Comedy, for her role in the film.

During the 1970s, Mia Farrow frequently switched between theatre and movies. She performed in several classic plays in London during the early and mid-1970s including the likes of ‘Mary Rose’ (1972), ‘Three Sisters’ (1973) and ‘Ivanov’ (1976). She was the first American actress to have joined the Royal Shakespeare Company. She also appeared in several feature films during this period including ‘See No Evil’ (1971), ‘Docteur Popaul’ (1972), ‘The Great Gatsby’ (1974), ‘The Haunting of Julia’ (1977) and  ‘A Wedding’ (1978). Besides theatres and movies, she also starred in some made for television films during the 1970s. The most notable among these is the musical version of ‘Peter Pan’ (1976), in which she played the lead role. In 1979, she appeared opposite Anthony Perkins in the Broadway play ‘Romantic Comedy.’

Mia Farrow was part of the entourage along with all four members of The Beatles, Donovan, and Mike Love, as well as her sister Prudence Farrow, who visited the ashram of Maharishi Mahesh Yogi in Rishikesh, Uttarakhand in February 1968. She spent part of the year studying Transcendental Meditation at the ashram.

Mia Farrow married singer Frank Sinatra on July 19, 1966, at the age of 21. They were later divorced in August 1968 though they remained friends afterwards. On September 10, 1970, she married composer André Previn only to be divorced in 1979. Her relationship with actor-director Woody Allen started during 1979 and continued until 1992 as Allen was caught having a sexual relationship with her 21-year-old adopted daughter, Soon-Yi.

Mia Farrow had four biological, and seven adopted living children as of September 2016. She and her second husband André Previn have three biological children. They are twins Matthew and Sascha and Fletcher. Her fourth child, Satchel O'Sullivan Farrow (later known as Ronan Farrow) was born on December 19, 1987. According to Mia Farrow, Ronan’s biological father could be her first husband, Frank Sinatra.