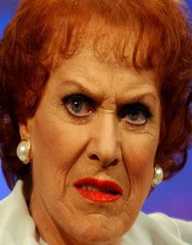 Maureen O'Hara was born on 17th August 1920. A renowned Irish-American actress and singer best known for her substantial role in western and adventure films. Her life breakthrough came after she starred alongside her longtime friend John Wayne in the movie, The Quiet Man.

Maureen O'Hara was born on 17th August 1920 as the second born in a family of six and a daughter to Charles and Marguerite. She grew up in Ranelagh, Dublin. Her early life was preoccupied with activities mainly including fishing, riding horses, swimming and soccer.

Maureen O'Hara first enrolled to John Street West Girls School in Dublin. As early as at the age of six, she trained in drama, music, and dance at Ena Mary Burke School of Drama and Education. She later went on to join the Abbey Theatre where she won her first award of the national competition, the Dublin Feiz Award. She finally graduated from Guildhall School of Music as the first youngest student ever to graduate from the school.

Maureen O'Hara first worked as a bookkeeper and a typist. She kicked off her acting career at the age of 17, handing her first role at the Abbey Theatre after an invitation to Elstree Studios for a screen test by Harry Richman, an actor-singer whose works she admired. Dissatisfied with the auditions, she walked out and later on went to work with Charles Laughton on a seven-year contract at Mayflower Pictures.

The main life achievement of Maureen O'Hara's acting career came after her role and engagement with John Ford's film, How Green Was My Valley  (1941) which won the Academy Award for Best Picture. This engagement lasted for two decades, featuring her in a total of five films.

She received an honor on This Is Your Life in 1957 and doubled this as the first person to ever receive the American Ireland Lifetime Achievement Award in Los Angeles.

Maureen O'Hara was married to George H. Brown at the age of 19. Their marriage was brought to a halt in 1941 after O'Hara had failed to turn up for their marriage ceremony. She later married Houston Price in December 1941. Together they had one daughter, Bronwyn Bridget Price. They later divorced in 1951 for abuse of drugs reasons. She finally settled with her third husband, Charles Blair in 1968.

Maureen O'Hara died of natural causes on October 2015 in her sleep at the age of 95 and was buried at Arlington National Cemetery in Virginia.