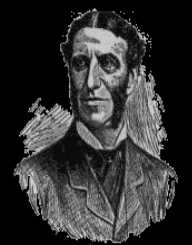 Matthew Arnold was one of the most famous English poets and cultural critic. He gained fame at a young age while still a student at Rugby School and eventually becoming one of the most celebrated poets of the 20th Century who revolutionalized the world of English Literature.

Matthew Arnold was born on 24th December 1822 in Laleham, Middlesex, England to Mr. Thomas Arnold, a teacher, and his wife Mary Penrose Arnold, the daughter of a clergyman. He was the eldest of three children, and his brothers were Tom Arnold, a literary professor, and William Arnold, a novelist.

When Matthew Arnold was six years old, his family moved to Rugby where his father worked as the headmaster. At the age of seven years, he met Arthur Hugh Clough who later became a poet and his friend till his death. At nine years of age, he was enrolled in Uncle Reverend Buckland’s preparatory school where he studied for one year. In 1836, he joined Winchester College before returning to Rugby school to study under his father.

In 1841, Matthew Arnold joined Balliol College, Oxford where he studied on an open scholarship. A year later, his father died, and they moved back to their home in FoxHow where they stayed permanently, and it was here that he met William Wordsworth, a legendary poet, for the first time.

Matthew Arnold graduated from Oxford and went back to Rugby school in 1844, this time as a classics teacher. In 1847, Arnold worked as Lord Lansdowne’s private secretary; a position Lord Lansdowne granted him due to the respect the ‘Lord’ had for Arnold’s father.

At this point, Matthew Arnold had decided to marry and have a family. However, he realized he could not successfully maintain a family with the meager earnings he received as a private secretary, so he applied for the schools’ inspector job. In 1851, he was employed by the government as an inspector of schools. As an inspector, he regularly traveled around England

Matthew Arnold started getting famous as a poetry writer. In 1849, he published his first poetry book titled, The Strayed Reveler followed by a verse drama titled, Empedocles on Etna in 1852. From this time, his career in poetry took off, and he continued writing until his death.

Along with his work in poetry, Matthew Arnold was also a famous Culture Critic; one of his publications in this field is Culture and Anarchy, published in 1869. In 1857, he worked as a professor of poetry at Oxford where he became the first professor to lecture in the English language rather than Latin. Following his great success, he was re-elected in 1862. He also wrote most of his famous works during this time, including, Essays in Criticism (1865) and Culture and Anarchy (1869). His poetry always tried to solve the problem of psychological isolation.

Some of Matthew Arnold's most influential essays include The Function of Criticism (1865), The Study of Poetry (1880), New Poems (1867), among others. In 1873, he started writing on theological subjects and handled matters related to religious beliefs. One of his most famous publications in this category is ‘Last Essays in Church and Religion’ published in 1877. His famous prose works include the Study of Celtic Literature, Essays in Criticism, Essays in Celtic Literature, Mixed Essays, Last Essays on Church and Religion, among others.

Matthew Arnold married his wife Frances Lucy Wightman, the daughter of the Queen’s Bench Justice, Sir William Wightman, in 1851. The family settled at the Thames and was blessed with six children including Thomas (1852), Trevenen William (1853), Richard Penrose (1855), Lucy Charlotte (1858), Eleanore Mary (1861) and Basil Francis (1866). Only three of these children outlived their father.  His birth sign was Capricorn.

On 15th April 1888, while walking with his wife, heading to Liverpool Landing Stage where they were to meet their daughter, who was coming from the USA, Matthew Arnold died suddenly of heart failure.