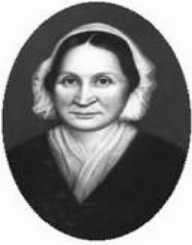 Mary Lyon was born on 28th February 1797, to Aaron and Jemima Lyon. She was born in Massachusetts, United States, in the town of Buckland. The family were farmers, but Lyon’s father died when she was just five years old.

Her upbringing was difficult, as the whole family pitched in and did what needed to be done to keep the farm going. When she was 13, her mother moved away to get married. Her brother ran and managed the farm, and Mary Lyon stayed with him, looking after the domestic chores.

When she was young, Mary Lyon attended several schools. These included Sanderson Academy, Amherst Academy, and Byfield Female Seminary, and in 1814 began teaching as well.

By 1817 she was studying at Sanderson Academy, based in Ashfield. Mary Lyon taught at the same time, and it was a continual juggle for her to fit her studies around her teaching schedule. She paid for her education and boarding fees by weaving blankets and trading them.

While at Byfield, she became friends with both the headmaster, Rev. Joseph Emerson, and his assistant, Zilpah Polly Grant. She loved the structure of teaching at Byfield, which was an academic education with Christian commitment.

After Byfield, Mary Lyon had the small school that she taught at, then two others, Adams Female Academy and the Ipswich Female Seminary, both run by Grant.

Mary Lyon left Wheaton, along with the principal, Eunice Caldwell, to open Mount Holyoke Female Seminary. Eight students went with them. Her vision was to have a school that allowed people from a wide variety of socioeconomic environments, to have their daughters educated. Mount Holyoke opened in 1837.

High academic standards were striven for, and entrance exams in keeping with Mary Lyon’s high standards had to be sat and passed to gain acceptance. The tuition fees were about a third of what was being charged at Ipswich Female Seminary, to encourage families from all classes to apply.

She believed in daily exercise for women, and the students had to walk a mile each day after breakfast. The students also participated in calisthenics. Exercising for women raised some eyebrows, but Lyon was an early advocate of women’s fitness.

Another novel policy of the school was to have students participate in domestic chores such as cooking and cleaning, which helped Mary Lyon keep the fees lower. Even though her policies were questioned at times, it didn’t take long for her to hit her target of 200 students enrolled.

Mary Lyon believed the world was going to change about women taking on more central roles than they had in the past. In keeping with this line of thought, Lyon’s students were well educated, particularly in the sciences and mathematics.

In 1897, a new hall was built at Mount Holyoke College, replacing the seminary building that had been there previously. The new hall was called Mary Lyon Hall.

Numerous schools have rooms and halls named after Mary Lyon.

In 1905, Mary Lyon was inducted into the Hall of Fame for Great Americans, and she has also been named in the National Women’s Hall of Fame.

It is thanks to visionaries like Mary Lyon that women are as far progressed as they are today, particularly with being able to attain the same education as men.