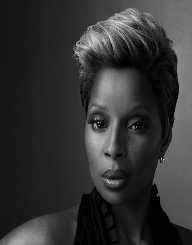 American singer and rapper Mary J Blige was born in The Bronx, New York on the 11 January 1971. Her father, Thomas Blige was a musician and her mother Cora Blige, a nurse.

Mary J Blige was raised in Richmond Hill, Georgia and later moved back to New York to live with her mother and sister.

Mary J Blige dropped out of high school and did not graduate.

Having been exposed to gospel music while living in Georgia Mary J Blige became interested in music. She sang in various bands. In the late 1980s she recorded a cover of Caught Up In Rapture, and when Jeff Redd an employee of Uptown Records heard it he was impressed and sent it to Andre Harrell, the CEO of Uptown Records. The result was that in 1989 Blige was offered a recording contract as a backing singer with the label with the label.

Mary J Blige’s career breakthrough came when the rapper, songwriter and the record producer Puff Daddy (Sean Combs) undertook to produce her first album What’s the 411? The album was released on the 28 July 1992 and reached number six on the Billboard 200 and then reached number one on the Top R&B/Hip-Hop Albums chart. What’s the 411? was certified platinum three times by the RIAA and established Blige was a recording star. On the 25 August 1992 Real Love was released and this become Blige’s first top ten hit on the 100 Hot chart. Real Love further cemented her status as a major recording star. Her second album, My Life was released in 1994. Other albums include Share My World (1997). Mary (1999). No More Drama (2001). Love & Life (2003). The Breakthrough (2005), Growing Pains (2007). Stronger With Each Tear (2009. A Mary Christmas (2013). The London Sessions (2014) and Strength of a Woman (2017).

Her first number one hit was Family Affair which topped the Billboard 100 on the 3 November 2001 and stayed there for six consecutive weeks. In April 2006 Be Without You charted number one on the R&B chart for the 15th consecutive week. This broke Mariah Carey’s record of fourteen weeks which she had held with We Belong Together.

Mary J Blige has toured widely with her first tour Share My World Tour taking place in 1997 and 1998. Her latest tour is the Strength of a Woman World Tour (2017).

Blige started her recording label in 2004. The label, Matriarch Records signed the girl group Just’Us in 2012.

Mary J Blige has endorsed the perfumes My Life and My Life Blossom as well as a range of sunglasses. Blige also owns a production company is involved in several film and television projects.

Other products Blige has endorsed and companies she has worked with include Air Jordan, American Express, Apple Inc., Burger King, Coca-Cola, and Pepsi.

Mary J Blige married her manager Martin Isaacs on the 7 December 2003. In 2016 the marriage ended in divorce.