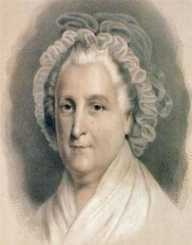 Martha Washington was a daughter of a plantation owner in Virginia. After the American Revolution, she became the inaugural First Lady of the United States of America.

Martha Washington was born June 13, 1731, in New Kent County, Virginia. She was the eldest child of eight children. Her parents were John Dandridge and Frances Jones. Martha’s father was an immigrant from England. Her mother was born in Virginia. Martha was raised in Chestnut Groove plantation with her siblings.

Informal education was the priority for girls at that time. Martha Washington was schooled at home. Women at that time were restricted to housekeeping roles. Emphasis was given to the traditional house settings. She was trained in singing and music.

Martha was taught sewing, embroidery and managing household affairs. As a daughter of a plantation owner, she was also trained in how to manage the plantation. This included crop farming and selling, animal husbandry, and herbal medicine.

At the age of eighteen, Martha Washington married Daniel Custis. This was on May 15, 1750. Custis was about twenty years older than her. He was the wealthy owner of White House plantation, close to where Martha was born. The couple stayed together for seven years. In 1757 Custis died, making her a widow at the age of twenty-five. Martha inherited the plantation that made her very wealthy.

Martha Washington also had four children with Custis. They were Daniel, born in 1751 and Frances born in1753. These two died in their early years of childhood. Then the couple had John and Martha. These were born in 1754 and 1756 respectively. In all, Martha inherited five plantations, three hundred slaves, and tobacco business.

Martha Custis then remarried George Washington in 1759. They were both twenty-seven. She later adopted her second husband's name and became Martha Washington. The couple never had children of their own.

George Washington was named commander of the American army. Martha Washington played a vital supporting role to her husband. She moved with her husband during the war. Martha enlisted the support of wives of the military officers to support their husbands actively.

She rallied financial support for the troops. This she got from wives of governors who favored independence from Britain. The army personnel addressed her as Lady Washington. This was due to the respect they had for her support.

At independence, George Washington was named the president. There was no election campaign. Martha Washington never liked her husband to take the public office. When the swearing in was done in April 1789, Martha never attended. Martha was in the swearing ceremony for her husband's second term in office in March 1793.

Though she was present, Martha Washington took no official role in the ceremony. Martha hated the restrictions put on her as the presidential wife. She once said that it felt like a state prisoner.

Martha Washington reluctantly followed her husband to the first capital of New York. The public life in the capital was restricted. Her initial role was to host dinners for visitors of the president. Martha had to chat way for herself. Despite the protocol restrictions, she continued in supporting charities and the welfare of the war veterans. Martha also sought inspiration from Europe in handling her official duties.

She modeled the role of First Lady close to what she saw in Europe. This endeared her to many Europeans. When the second term of President Washington ended, she retired to their home in Virginia.

In Mount Vernon, Martha Washington felt at home again. Life was not all easy for them. Her husband was now a global figure. Many visitors paid courtesy calls to them. She was always in the limelight. After the death of her husband in 1800, she took to her quiet life.

Her close companion was Abigail Adams, the wife of the second president. Martha’s health deteriorated after Washington’s death. In May 1802, she died. She was buried in her husband's tomb in Mount Vernon.

Martha Washington captured the hearts of many for her service to the people. Her slaves were freed according to her will. She has two military ships in her name. Postal stamps, US banknotes, and coins have engraved her face. Educational institutions have her name. This shows the influence she has on the American history.