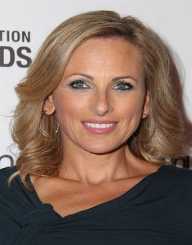 Marlee Matlin is an award-winning deaf actress and a prominent member of the Association of the Deaf. She is famously known for her remarkable performance in ‘Children of a Lesser God’ which earned her an Academy Award as the Best Actress in a Leading Role.

Marlee Matlin is the last born of parents, Donald Matlin and Libby, born in Morton Grove, U.S, on August 24, 1965. At the age of 18 months, Matlin lost her hearing due to a malformed cochlea. She attended a Synagogue for the deaf where she studied Hebrew and Torah.

Later on, she enrolled at John Hersey High School in Arlington Heights where she graduated and joined Harper College. Her baby sister molested her at the age of 11 followed by her high school teacher.

Marlee Matlin made her first stage performance as Dorothy in 1972 at children’s theatre of The Wizard of Oz in an International Centre on Deafness and the Arts (ICODA). She continued performing with the ICODA during her childhood and made a film debut later in 1986, in ‘Children of a Lesser God.'

However, in 1988, she made a guest appearance in the movie, ‘Just the Way You Are’ which she performed with sign language and played a prom queen turned hippie in a video song ‘We Didn’t Start the Fire.’ Additionally, she played a deaf widow in ‘Bridge to Silence’ followed by a guest role in ‘Picket Fences’ series in 1992 which she became a regular during its last season in 1996.

By 1994, Marlee Matlin made a remarkable performance in a television drama, ‘Against Her Will: The Carrie Buck Story’ which she portrayed a hearing woman for the first time in her career. Her performance resulted in a recurring role in ‘The West Wing’ and ‘Blue’s Clues’ and in films such as, ‘ Seinfeld,' ‘The Practice’ and ‘Law & Order: Special Victims Unit’ which earned her a Primetime Emmy Award.

Notably, she published her novel, ‘Deaf Child Crossing’ which she based on her childhood experiences in 2002, and a sequel titled, ‘Nobody’s Perfect’ in October 2007. In 2004, she starred as Amanda in the movie, ‘What the Bleep Do We Know?’ and hosted the third annual Festival for Cinema of the Deaf in Chicago.

Two years later, she played in ‘Desperate Housewives’ as a deaf parent and made recurring roles as Joy Turner in ‘My Name Is Earl.' She also cast in Season 4 of ‘The L Word' and made recurring appearances to Seasons six of the show.

On February 2007, Marlee Matlin interpreted in American Sign Language, ‘Star Spangled Banner’ in Miami Florida followed by an appearance on ‘Nip/Tuck ‘in January 2008 and competed with Fabian Sanchez on the ABC’s ‘Dancing with the Stars.’

A year later, she starred in ‘Hollywood Walk of Fame’ and appeared on ‘Seth & Alex’s Almost Live Comedy Show’ and voiced Stella in the tenth episode of ‘The Blind Side.' Additionally, she released her autobiography, ‘I’ll Scream Later’ on April 4, 2009.

In 2010, Marlee Matlin made a pilot for a reality show titled, ‘My Deaf Family’ and signed a speech during the 20th Anniversary of Americans with Disabilities. In 2013, she performed the movie, ‘No Ordinary Hero: The Super Deafy Movie’ followed by her role as the ‘American Civil Liberties Union’ in 2015 and the musical, ‘Spring Awakening.'

Marlee Matlin has been playing the role of Melody Bledsoe on the ABC’s ‘Switched at Birth’ and will be joining the third season of ‘Quantico’ as Jocelyn Turner.

In 1988, she received the Samuel Beard Award by Jefferson Awards followed by a Golden Globe Award for her lead role in a television series followed by an Emmy Award Nomination in 1992, and a Cable ACE Nomination as Best Actress in 1994

At the age of 28, Matlin married Kelvin Grandalski on August 29, 1993, and the couple has four children named, Sarah, Brandon, Tyler, and Isabelle.