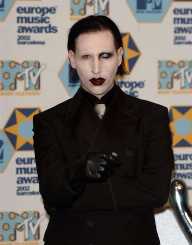 In this article, we will be talking about one of the most controversial and outrageous members of the music community, Marilyn Manson. He is hated and loved at the same time. Half of the people who know of him hate him, and the other half loves him. He started out as just a little kid living a healthy life to one who pushes the boundaries of society. Most would say that he is twisted and grotesque. But others would say that this is what part of his appeal is. Marilyn Manson is also known for his very theatrical performances during his concerts.

Brian Hugh Warner was born to Hugh Warner and Barbara Wyer on January 5, 1969. He was born in Canton, Ohio and is an only child. Despite the fact that his mother was Christian, he attended Heritage Christian School as a child, and his mother made him attend church on a regular basis, he harbored anti-Christian feelings. He developed a dislike of all things religious. He had even begged his parents to consider putting him in a different school because of this.

As a child, he had a rough time because he was molested many times by a neighbor. He tended to have a rebellious and controversial nature throughout his life. In 1990, Brian went to college in Florida to study Journalism. While there, he wrote articles for a music magazine giving him the opportunity to hang out with other musicians.


His Career in Music

In 1989, Marilyn Manson was born. It was at this time that he created his stage name and formed the band Marilyn Manson & the Spooky Kids. Later on, it was changed it to just Marilyn Manson. He became an American goth-rock performer. The kids loved him, and the parents hated him. He has been protested and demonstrated for over the years.

Manson had created his name by combining the names of Marilyn Monroe and Charles Manson (an actress and a serial killer). This was the beginning of his rebellious and controversial nature. He was known for being eccentric and quirky.

Marilyn Manson loves to dress weirdly and wears makeup. Bright red lipstick and a stylized contact lens and his hair is dark black. This makes him look creepy, and his fans love it so much. This is what adds to his mystery and charm.

The band played in clubs for four years before they caught the notice of Trent Reznor from nine-inch nails. It was he who helped them release their first album.The Manson family album was the original title for Manson’s first album. This was renamed to portrait of an American family, and the songs were re-recorded and remixed because the label didn’t like what some of the songs had to say. The record was released in 1994.

In 1995 the band released smells like children, which contained songs about drugs and child abuse. He even added a remake of the eurhythmics song: sweet dreams (are made of this).

A year later in 1996, Marilyn Manson released the first album in a 3 part album trilogy called antichrist superstar. This album brought the band considerable fame. The second album of this trilogy Mechanical Animals was released in 1998. It reached the no.1 status in the US. 2000 brought the third installment of the trilogy called: Holy Wood (in the shadow of the valley of death). This album couldn’t live up to the success of the previous record.

In April of 1999, when the boys laid waste in the columbine shooting, Marilyn Manson was blamed by the media and critics. They believed that he had negatively influenced the boys and was the cause of the boy’s actions.

A week after the murders Manson was due to put on a concert in Denver, not too far from the shooting. But due to pressure from city officials the concert promoter canceled the concert. Due to the emotional issues he felt over the situation of being blamed, he withdrew the last five tour dates of the show that year.

Manson’s concerts have become very theatrical over the years. He has been known for his cutting of himself during his shows, along with his vulgar and controversial acts during his performances.

Other Adventures in Life

Although music is his passion in life, Marilyn Manson has appeared in some movies. But usually only as minor supporting roles or cameo appearances. He is attributed to 109 soundtrack credits and 24 acting credits.

The acting wasn’t the only extra activity that he has done in his life. Manson loves to paint in his spare time. He has taken a collection of his paintings and displayed them in an exhibit in 2002. Then in 2010, he revealed a series of 20 paintings entitled Genealogies of Pain that was on display.

In 2001, Marilyn Manson started seeing Dita Von Teese. Then in 2005, they decided to make their relationship severe by getting married. Over the next couple years, their relationship would take a downturn. She seemed to want him to change and he wouldn’t or couldn’t.

And he developed a friendship with Evan Rachel Wood. This made their marriage deteriorate even more. Then in 2007 they finally divorced. After that, a relationship with yet Rachel wood was made public. They dated for a while, and at one point in the relationship, they became engaged. Later on, the two broke it off and went their separate ways.

Since the beginning of his career, Marilyn Manson has sold over 50 million records worldwide. He has released at least 43 albums between then and now. Say 10 is his tenth studio album and will be released this year. Three of his albums went platinum, and two of them went gold over the years just in the US alone. He had two number 1 albums, and 7 of his releases went into the top ten.

Manson has been so successful at what he does that he has no intention of ever giving it up at the moment. He is enormous in self-expression and controversy. Because of everything that he has done during his career he has been accused of being a Satanist and into worshiping the devil. People have protested and boycotted him for all of this.

Manson has been known for being a fan of Anton LaVey, the founder of the church of satin. Manson is also an honorary priest of the church. He also likes Allister Crowley and his writings. He is known as the highest profile Satanist in history.

He was due to perform at the Oz fest one year, and New Jersey wanted the Osbornes to cancel him from playing. They refused and defended him over the issue.

If you have never heard of any of his music, then you can look him up on YouTube and check him out. Then you can see what he is all about. It will also give you an impression. Either you will just fall in love with his music, or you will completely hate him and his music. Whatever your reaction to him and the music you will not be able to stay neutral over Marilyn Manson and his works.