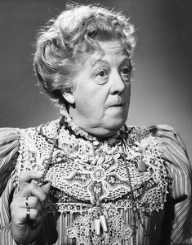 Dame Margaret Taylor Rutherford was an Academy Award-winning British actress who is best remembered for playing the role of Agatha Christie’s spinster sleuth Miss Marple during the twilight years of her career. She was otherwise an accomplished stage, film and television actress with her film career boasting collaborations with master filmmakers like Charlie Chaplin, Orson Welles, and David Lean.

Margaret Rutherford was born on 11th May 1892 to William Benn and Florence Nicholson. She was raised by her aunt Bessie Nicholson whom she regarded as an "adoptive mother and one of the saints of the world” in her autobiography. Both of her parents had mental and psychological issues which marred Margaret’s childhood days.

Her father William Benn was regularly admitted to asylums, and in 1882, he killed her grandfather Reverend Julius Benn by brutally bashing his head with a chamber pot. While the family immigrated to Madras, India to start a new life, tragedy struck again when her mother Florence committed suicide by hanging herself from a tree.

At that time, Florence was pregnant too. Little Margaret who was three years old that time was sent away to live with her aunt in London and was told that her father had died of shock soon after. But when she was a teenager, Margaret Rutherford found out that her father was still alive and was readmitted to Broadmoor Hospital. He stayed there under constant care and strict supervision until his death in 1921.

She had a keen interest in theatre and acting from her school days, and she started taking private acting tuitions. She later enrolled at the Old Vic School.

It was here where Margaret Rutherford made her stage debut in 1925. In 1939, she impressed the critics in the role of the governess Miss Prism in The Importance of Being Earnest, a role she reprised when it was adapted on celluloid by Anthony Asquith. Her breakthrough movie role though came in 1945 when she starred alongside Rex Harrison in David Lean’s fantasy-comedy drama ‘Blithe Spirit.’

Margaret Rutherford had already wowed the audience at Piccadilly Theatre back in 1941 with her brilliant enactment of the eccentric clairvoyant Madame Arcati, and her performance in front of the camera also didn’t disappoint.

Rave reviews poured in from everywhere with Variety comparing her screen presence to Douglas Fairbanks saying – “Acting honors go to Margaret Rutherford as Madame Arcati, a trance medium who makes you believe she's on the level. There is nothing ethereal about this 200-pounder. Her dynamic personality has all the slapdash of Fairbanks Sr. in his prime”.

After the success of the Ealing comedy ‘Passport to Pimlico’ in 1949, Margaret Rutherford was cast as the quintessential comic character in comedy-dramas like Castle in the Air, An Alligator named Daisy, I’m All Right Jack, etc. She starred in the multi-starrer The V.I.P.s in 1963 alongside Elizabeth Taylor and Richard Burton. She also appeared in Orson Welles’ masterpiece ‘Chimes at Midnight,’ based on Shakespeare’s recurring character Falstaff, alongside Jeanne Moreau. One of her very last films was Chaplin’s ‘A Countess from Hong Kong’ which starred Sophia Loren and Marlon Brando

For her immaculate performance in The V.I.P.s, Margaret won both the Academy Award and Golden Globe Award for Best Actress in a Supporting Role.

Margaret Rutherford became a household name with her portrayal of Agatha Christie’s Miss Marple in four George Pollock films in the early 1960s. The reticent and solemn Marple was portrayed with a much lighter shade in the films which drew criticism from the Queen of Crime herself, although she loved Rutherford’s performance. Nevertheless, critics and audiences lapped it up, and the eccentric and funny Marple was a hit.

Margaret Rutherford occasionally had her bouts of hysteria, and her family’s past haunted her so much that she went in and out of depression, fearing that she might also suffer from the same mental conditions.

She suffered from Alzheimer’s disease toward the end of her life and had to let go of many theatre productions because of her ill health. Margaret Rutherford married actor Stringer Davis in 1945 who took care of her until she breathed her last on 22nd May 1972. After her death, it was revealed that she did pass her share of time at mental hospitals and was subjected to electric shock treatments as well.