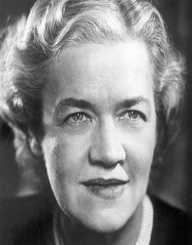 Margaret Chase Smith was born on December 14th, in 1897. She was a well-known American politician who went ahead and served as the U.S. Representative from 1940 to 1949. Similarly, she also served as the U.S. Senator from 1949 to 1973. Aside from this, Smith also ran for office during the 1964 presidential elections.

Margaret Chase Smith was born on December 14th, in 1897. Her place of birth was in Skowhegan in Maine. She was the daughter of Carrie Matilda and George Emery Chase. Smith was the first born child in a family of six children. Unfortunately, two of her siblings died when they were young.

Margaret Chase Smith enrolled for her early education in a school called Lincoln and Garfield Elementary Schools. After that, she began working when she was only twelve.  Smith also helped her father in his store to shave his customers when he was not around. Later on, she went to Skowhegan High School. She graduated from the institution in 1916. In sports, she was an avid basketball player.

After graduating from high school, Margaret Chase Smith got a brief job as a teacher with the Pitts School. Similarly, she also went back to Skowhegan High School in 1917 where she coached the girls’ basketball team.

During the mid-1930s, Margaret Chase Smith developed a keen interest in politics. She became a member of the Maine Republican State Committee from 1930 -1936. After this, she accompanied her husband, Clyde Smith to Washington, D.C. where she would serve as his secretary. Here, she not only wrote his speeches but she also helped him with his research and handling his correspondence.

In early 1940, Smith’s husband fell ill, and as a result, he chose his wife to run for him his political post. A few months later, Smith’s husband passed away. Elections were held which gave Margaret Chase Smith the opportunity of serving as Congresswoman from Maine.

Later, in 1947, Margaret Chase Smith ran for the office of U.S. Senate after Wallace H. White Jr. retired before ending his third term. Smith won the primary elections that were held on June 21st, in 1948. She also managed to win the general elections which were held on September 13th, the same year. She was inaugurated into office on January 3rd, in 1949. She continued serving in the post of Senate until 1973.