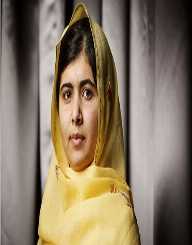 Malala Yousafzai was born on July 12th, 1997. She was born in Mingora Pakistan. She is a Pakistani born women’s rights activist. In 2014, she was bestowed with the Nobel Peace Prize making her the youngest person ever to win such an award. While she was still young, she received a death threat from the Taliban for supporting girls’ education. On her way home from school in 2012, she was shot, but she survived the attack. After this, she continued with her activist role in ensuring that girls’ education is upheld.

Malala Yousafzai was born on July 12th in 1997. She is the eldest daughter of Ziauddin Yousafzai and Toorpekai Yousafzai. During the early stages of her life, her place of birth was regarded as a tourist destination during summer. This however changed after the Taliban attempted to take over control of the area.

Because Yousafzai’s father ran some schools, she was obligated to attend one of them. Later on, the Taliban began their attack on the girls’ school that Yousafzai attended. It is after this that she gave out a speech targeting the Taliban and their ill intentions on her education career. Going by the speech name, "How dare the Taliban to take away my basic right to education?" Yousafzai communicated about her rights for girl child education.

During the late 2008 and early 2009, Malala Yousafzai blogged for the BBC detailing her experiences at the hands of the Taliban. As part of ensuring that she was safe, she concealed her identity by using the name Gul Makai. However, her real name was unveiled in December 2009.

Yousafzai’s activism in promoting women’s rights and specifically that of education gained her popularity. In 2011, she was one of the nominees for the International Children's Peace Prize. Still, in the same year, she was recognized and bestowed with - Pakistan's National Youth Peace Prize.

The more popular Malala Yousafzai got, the higher the risk that she was facing from the Taliban. On October 9th, 2012, the tragedy occurred while she was returning home after school. One of the Taliban’s gunmen shot her in the head. She was shot at the left side of her head with the bullet going through her neck ending up in her shoulder. Yousafzai and her two friends were the injured victims during this Taliban attack.

Fortunately, Yousafzai survived the terrible attack, and she received speedy medical care after being flown to a hospital in Peshawar. She was later moved to Birmingham, England for further treatment.

Ultimately, Malala Yousafzai recovered from the attack, and she was back on her studies. This time she attended school in Birmingham. While still studying and recovering in Birmingham, she gained global support. In 2013, she was given an opportunity by the United Nations to deliver her speech. This day was given the nickname Malala Day by the UN. She went on to publish her autobiography in the same year titled I Am Malala: The Girl Who Stood Up for Education and Was Shot by the Taliban.

Her continued activism after the attack gave her the lifetime opportunity of meeting with world’s prominent people such as Queen Elizabeth II and former president of the United States, Barrack Obama.