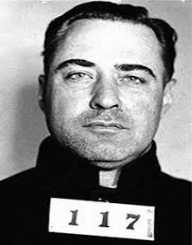 George Kelly Barnes was born on July 18, 1895, in the city of Memphis, Tennessee. He had a traditional upbringing in a well-off household. In 1917, he became an agriculture student at Mississippi State University.

Machine Gun Kelly was a poor student who often got in trouble at college. At the age of 19, he met a young woman named Geneva Ramsey. They soon got married and had two sons, named Bruce and George Jr. Kelly had to work to support the family. He initially tried to do legitimate work, such as driving a cab. He ended up becoming a bootlegger during the prohibition era. He made a lot of money and was always on the run from the police. He briefly served time in jails in New Mexico and Kansas. He met bank robbers such as Thomas Holden, Francis Keating, and Charlie Harmon. He eventually split up with his wife and left Memphis.

Machine Gun Kelly soon went to Oklahoma City. There, he met fellow criminal Kathryn Thorne. She had already been convicted of prostitution and robbery. She was also a suspect in the death of her former husband, Charlie Thorne. She and Kelly got married in Minnesota in 1930. She bought him a Thompson submachine gun and gave him the nickname “Machine Gun Kelly.” She boasted about him to other people, giving him a reputation as a dangerous gangster. The two of them committed several armed robberies in Texas, Iowa, and Washington. They worked together with Kelly’s associates Thomas Holden and Francis Keating.

In 1933, Kathryn and Machine Gun Kelly planned the kidnapping of oil tycoon Charles F. Urschel. They gathered up a few of their associates and entered his home in Oklahoma City on July 22. They abducted him and his friend Walter Jarrett. They soon let Jarrett go and took Urschel to a ranch in Texas. They demanded a ransom of $200,000, which his family paid on July 30. The following day, they set him free. He managed to figure out who the kidnappers were and where they held him. He told the authorities, and they went after Kathryn and Kelly.

The police managed to capture Kathryn and Machine Gun Kelly on September 26, 1933. On October 12, they were sentenced to life in prison. Their associates Harvey Bailey, Albert Bates, Will Casey, and Cassey Coleman earned lighter sentences. Kathryn was jailed in a federal jail in Cincinnati, and Kelly was jailed in Leavenworth in Kansas. He soon began claiming that he planned to escape and break out his wife. The authorities in charge of the prison took his threats seriously and transferred him to Alcatraz in California.

Machine Gun Kelly was a quiet and well-behaved prisoner in Alcatraz. The other prisoners gave him the nickname “Pop Gun Kelly” because he was not as dangerous as his reputation led them to believe. He passed away from a heart attack on his 59th birthday on July 18, 1954. His wife was set free in 1958 and lived a quiet life as a bookkeeper in Oklahoma City. She passed away in 1981, at the age of 85.