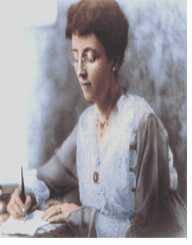 Canadian author Lucy Maud Montgomery was born on November 30, 1874, in Clifton, Prince Edward Island. Her mother died of tuberculosis when Montgomery was still a child. Her grief-stricken father gave the custody of Lucy to her grandparents. When she was seven years old, they moved to what is now Prince Albert, Saskatchewan in the community of Cavendish.

Her childhood was very lonely, and she spent a lot of time on her own, often creating many imaginary friends to cope. She went to school in Cavendish. When she was 13 years old, Lucy Maud Montgomery began to dream of becoming famous and submitted a poem for publishing, which got rejected. Her first poem was published in 1890 in Charlottetown paper. In 1893, she began attending the Prince of Wales College in Charlottetown and got a teachers license. In 1895, Montgomery went to study literature at the Dalhousie University in Halifax.

After finishing her degree in Dalhousie, Lucy Maud Montgomery began working as a teacher in several Prince Edward Island schools. She did not find much enjoyment in teaching, but in her spare time continued to write. She began publishing her stories in 1897, and until 1907 had around 100 stories published. In 1889, she was in a relationship with a local boy Nate Lockhart, but it ended when she refused his marriage proposal. During the 1890s, she was approached by her teacher John A. Mustard. However, at the time she was interested in Will Pritchard. She refused marriage proposals from both men.

In 1898, Montgomery moved to Cavendish to live with her grandmother. In 1901, she began working in Halifax as a substitute proofreader for a newspaper. During this time she was inspired to write her first novel. Montgomery published her first novel Anne of Green Gables in 1908. By the following year, the book was already re-printed for six times.

After Montgomery’s grandmother died in 1911, she married Ewen Macdonald, who was a Presbyterian minister. They moved to Ontario, where he took up the post as a minister of the St. Paul’s Presbyterian Church, Leaskdale. There she wrote her next eleven books. She and her husband had three sons together, but the second one was stillborn. During the World War I, she became an avid supporter of the war, believing that it will save the civilization. She often wrote articles urging men to volunteer for the Canadian forces.

Lucy Maud Montgomery often suffered from depression. In 1919, she was stricken by the Spanish Flu pandemic. After this, her husband spent hours telling her that he wished she and their children were never born since he was not elected by the God to go to Heaven. He refused to assist her with housework and child raising. She found solace in her writing.

Montgomery’s husband became estranged from his people when he joined the United Church of Canada and nearly ran over a Methodist minister. The family moved to Norval Presbyterian Charge, Ontario. In 1934, Macdonald was suffering from severe depression and signed into a sanatorium. The following year, Lucy Maud Montgomery moved to Swansea. She took up writing about Anne after a 15-year hiatus.

In 1941, Lucy Maud Montgomery completed her ninth Anne book The Blythes Are Quoted. The book was delivered to her published on the day of her death. Montgomery died on April 24, 1942, from coronary thrombosis. However, at the time she was suffering from depression and might have overdosed on drugs. Montgomery published a total of 20 novels, 500 short stories, a poetry book and her autobiography.