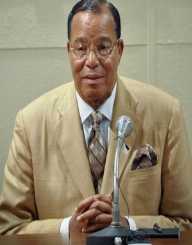 Louis Farrakhan was born on May 11th, in 1933. He earned his fame for being a religious leader. He currently leads the religious group identified as NOI (Nation of Islam).

In 1995, Louis Farrakhan was best remembered for having guided the Million Man March which took place in Washington D.C. The main agenda during this march was to urge black men to renew the commitments they had with their families.

Louis Farrakhan was born on May 11th, in 1933. His birthplace was in The Bronx, in the New York. He was the youngest son to Percival Clark and Sarah Mae Manning. Both of his parents had emigrated from the Caribbean islands.

Growing up, Farrakhan never got the chance of knowing his biological father. This is because his parents went separate ways before he was born. Later on, his mother went and lived with Louis Walcott who helped in raising young Farrakhan. Unfortunately, Louis Walcott passed away in 1936. This prompted the family to shift again, this time moving to Boston, Massachusetts.

Right from a tender age of six years, Louis Farrakhan had begun taking violin classes. By the time he clocked 13 years old, he had played with the Boston Civic Symphony and the Boston College Orchestra. The following year when he was 14 years old, Farrakhan was winning in national competitions.

Farrakhan’s singing career was at its peak at some point in his life. As a professional singer, he was identified as “The Charmer.” One of the hit songs that he released was the "Jumbie Jamboree."  While running his singing shows in Chicago, Farrakhan attended an event that was hosted by the Nation of Islam.

This marked a change in his career as he soon joined the Muslim organization in 1955. Individuals that influenced him in joining the movement included the likes of Malcolm X and Elijah Muhammad, the founder of the movement. Immediately after becoming a member of the movement, he adopted the name, Louis X.

Louis Farrakhan quickly rose up the ranks in the Islamic group. After some time, he went ahead and served as Malcolm X’s assistant. After that, he took over his post when he went to spread the religious news in the New York City. Following his quick religious changes, Muhammad bestowed him with a holy title “Farrakhan.”

In 1964, Malcolm X left the movement. This gave Farrakhan an opportunity to become Muhammad’s, right-hand man. Sadly, Muhammad passed away in 1975.

This was a huge blow to the Nation of Islam movement. Elijah Muhammad chose his son, Warith Deen Mohammad to succeed him. This is something that Farrakhan was not happy with considering the fact that his style of leadership inclined heavily on the Islamic faith. This prompted Farrakhan to quit the movement.

Louis Farrakhan never lost hope in leading his followers to follow the footpaths of his mentor Elijah Muhammad. As a result, he founded a new movement ‘Nation of Islam.’ This was followed closely by his newspaper dubbed The Final Call.

As a leader of the Nation of Islam, Farrakhan is best remembered for leading the Million Man March which took place in 1995. About two million people attended the event. Similarly, in 2000, he led a similar march called Million Family March.

Louis Farrakhan got married when he was still studying in college. He tied the knot with his high school sweetheart named Betsy Ross. Years later, his wife changed her name and adopted Khadijah Farrakhan as her official name. Together, the couple has nine children.