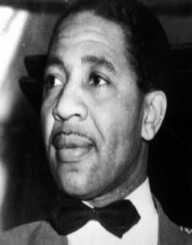 Alonzo Johnson was born 8th February 1899, in New Orleans, Louisiana, in the United States. He was born into a family of musicians, and he learned several instruments as a child. These included piano, guitar, and violin.

As a teenager, Johnson played guitar and violin in both his father's band and for trumpeter Punch Miller. Johnson's brother, James, played with him as well.

In 1917, Johnson toured England with a revue. He returned to the U.S. in 1919, only to find his entire family had died except for James. They had succumbed to the influenza epidemic that swept through the country in 1918.

Johnson settled in St. Louis in 1921, with James. They performed together as a duo, and Johnson played in orchestras that performed on riverboats.

In 1925, he won a blues contest. The prize was a recording contract with Okeh Records. Over the next seven years, Johnson recorded approximately 130 songs for the label.

He became one of the most popular artists on the label. Johnson traveled to New York where he was invited to record with the most prominent artists of the time.

Johnson also traveled to Chicago in 1927, where he recorded with Louis Armstrong.

In 1932, Johnson moved to Cleveland, Ohio. He started performing on radio, and he also found a band to play in.

Towards the end of the decade, Johnson recorded with musicians for the Decca Records label.

Johnson moved into rhythm and blues after the Second World War. He had a hit called Tomorrow Night in 1948, and he also had several follow-up hits.

He toured England in 1952, and during the tour, he changed his name to Lonnie. The trip didn't go well, but the poor organization is believed to be the reason.

When Johnson returned to the U.S., he moved to Philadelphia. He found work in a steel factory, and he worked as a janitor.

In 1959, a disc jockey by the name of Chris Albertson found Johnson and asked him to record an album. It was for Bluesville Records. The Playboy Club then engaged him to perform.

Over the next few years, he continued to record albums and perform. In 1965, Johnson opened a club, Home of the Blues, in Toronto. The business failed, and Johnson returned to recording and touring.

Johnson received severe injuries when he was hit by a car in March 1969. He never fully recovered. Johnson died on 16th June 1970.

In 1997, Johnson posthumously entered the Louisiana Blues Hall of Fame.

Johnson married Mary in 1925. Mary became a blues singer in her own right, although the couple didn't record together. They had six children, but they divorced in 1932.