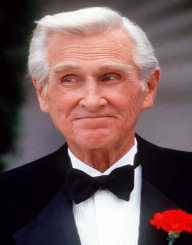 Lloyd Bridges enrolled in and attended the University of California, Los Angeles. While he was at the school, he studied law, only to find that it bored him. Once he realized he wouldn’t be happy in a career in law, he decided to go into acting instead. He did stay until he graduated, though. After graduation, he put his heart and soul into acting, leaving his normal life behind forever.

Lloyd Bridges earned his first credited role in 1941 in the movie; The Lone Wolf Takes a Chance. He signed on with Columbia Pictures. For the next decade, Bridges worked on mostly B-rated movies with the company. Some of his early movies are listed below.

In the 1950’s, Lloyd Bridges’ job prospects were cut in half as he was blacklisted from Hollywood for being associated with the communists. In the late 1950’s, he had his named cleared and was able to act again. This time around, Lloyd Bridges was able to land larger roles than he had gotten in the 1940’s.

In the late 1950’s Lloyd Bridges had his big break. He starred in the show Sea Hunt. He stared into the show for four years. Afterward, he continued to work on several other television shows and movies. He worked mostly in the roles of old men trying to find adventure in their lives. Some of his most famous shows and movies are listed below.

How the West Was Won

Harts of the Wes

Lloyd Bridges won the Golden Boot Award in 1996. He was also nominated for several other awards, which are listed below.

Lloyd Bridges was awarded a star on the Walk of Fame in 1994.

Lloyd Bridges married his first and only wife, Dorothy Simpson, when he was 25 years old, in 1938. He has three sons: Garrett, Beau, and Jeff. Sadly, Garrett died when he was an infant. Both of his surviving sons also grew up to be actors. He even worked with Jeff in a movie Tucker: The Man and His Dream. He also worked on one of Beau’s shows, Harts of the West.

Lloyd Bridges also had one daughter, Lucinda. Lloyd’s grandson, Jordan Bridges, is also an actor. Lloyd Bridges stayed married to his wife until his death. He also remained close to his sons for his entire life.

Lloyd Bridges died of natural causes on March 10, 1998, in Los Angeles, California, USA. He was 85 years old when he passed away.