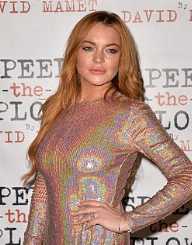 Lindsay Dee Lohan was born on 2nd July 1986, to Michael and Dina Lohan. She was born in The Bronx, New York City, New York, United States. Lohan is the eldest of four children, and her siblings have all been models or actors. Her father is a former Wall Street trader, and her mother used to be a singer and dancer.

Lindsay Lohan first studied at Cold Spring Harbor High School, then transferred to Sanford H. Calhoun High School. She did well in science and mathematics but left in grade 11, at which time she started homeschooling.

Lindsay Lohan's parents had a troubled marriage. They originally married in 1985 but separated when Lohan was three. They later reunited, but separated in 2005, and eventually divorced in 2007.

Lindsay Lohan's modeling career began when she was three. She was represented by Ford Models and did modeling for the likes of Calvin Klein Kids and Abercrombie. Lindsay Lohan appeared in over 60 television commercials, and at age ten she landed the role of Alexandra Fowler on the television soap drama, Another World. By this time she was considered a veteran in the industry.

Lindsay Lohan was only in the role for 12 months when she left, as she had won an acting role in the 1998 Disney family comedy, The Parent Trap. Over the next few years, until 2002, Lohan continued to win roles on both television and in the movies.

In 2003, she starred in another Disney family comedy, this time with Jamie Lee Curtis, called Freaky Friday. Lohan continued to win the praise of critics in her movie performances.

In 2004, Lindsay Lohan did two movies. One was a Disney comedy called Confessions of a Teenage Drama Queen, the other was Mean Girls, which was her first movie away from the Disney fold.

From 2004 to 2006, Lohan branched out into hosting television shows such as the MTV Movie Awards and the World Music Awards.

She returned to Disney in 2005 to star in another comedy, Herbie: Fully Loaded. Lindsay Lohan was then in a romantic comedy called Just My Luck which was released in 2006, but after that, she concentrated on doing smaller, meatier roles, in independent films.

Lindsay Lohan wasn’t without controversy. In May 2007, she was arrested for driving under the influence of alcohol (DUI). She had just been cast in a role for the movie, Poor Things, but the directors decided to give her the benefit of the doubt and put the filming on hold while Lohan went to a rehabilitation facility for 45 days.

Lindsay Lohan was only out of rehab for two weeks, when she was arrested once again, this time for possession of cocaine, driving under the influence, and driving with a suspended license. She lost the part in the movie.

She was sentenced to an alcohol education program and community service. Lindsay Lohan acknowledged her alcohol and drug addiction. She entered another rehabilitation center and remained there for three months.

In January 2007, Lindsay Lohan underwent surgery for her appendix. She then admitted herself to a rehabilitation facility for 30 days. She was filming I Know Who Killed Me at the time, and continued to film during the day, and return to the facility of an evening.

Other appearances, both acting and promotional interviews were canceled during 2007.

Lindsay Lohan returned to the screen in May 2008, in a television series called Ugly Betty. She also launched her own clothing line, called 6126. By 2010, she had over 280 pieces in her range.

Lindsay Lohan's DUI probation continued to haunt her. As she failed to attend the substance abuse treatment classes that the court wanted her to attend, in October 2009, her probation was extended by another year.

Lindsay Lohan continued to film movies, her 2010 release was called Labor Pains, which became a TV movie on the ABC.

In September 2010, Lindsay Lohan failed a drug test, which saw her probation revoked. She spent several hours in jail, this for the second time. Several days later, she was admitted to the Betty Ford Center, which is a drug and alcohol treatment facility. She was there under court order for three months.

Lindsay Lohan appeared to be getting her life back on track in 2012. She posed for a Playboy magazine shoot and started making appearances on different television shows.

Unfortunately, on her way to filming in June 2012, she was in a car accident. She provided false information to the police officer, and in March 2013, she was sentenced to yet more community service and had a further extension placed on her probation. She also spent three months in another rehabilitation facility.

Lindsay Lohan had further movie releases in 2013 and more television appearances. Since then, there haven’t been any further untoward events, just work projects keeping her in the public’s eye.

Lindsay Lohan has been in over 20 movies to date.

Her first album had moderate success; her second album went Gold. She had to chart success with some of the songs, but no great reviews from the critics.

Lindsay Lohan has received many nominations over the years and has also won several awards. Her awards come from the likes of MTV Movie Awards, Teen Choice Awards, Young Artist Award, and Hollywood Film Festival.

Lindsay Lohan is known to be actively involved in humanitarian projects and makes large contributions to the American Red Cross on a yearly basis.