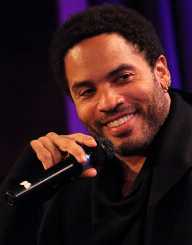 Being featured as Cinna in the Hunger Games trilogy is not the only career accomplishment this exceptionally talented singer, and guitarist has to his credit. Lenny Kravitz is the winner of every Grammy Award for three consecutive years in the Rock Vocals category. His song Justify My Love was covered by Madonna.

Leonard Albert Kravitz known famously as just Lenny Kravitz was born on May 26, 1964, in Brooklyn, New York, the U.S. His father was Seymour Kravitz and mother Roxy Roker. Both his parents were successful people, but of different races. Seymour was Jewish, whereas Roxy was African-American. Being a biracial child, Lenny was subjected to derogatory remarks by his peers and other people at school.

After watching the Jackson 5 perform, Kravitz was inspired to pursue music. His mother was a famous TV personality who appeared on the show The Jeffersons. Kravitz went to the Beverly Hills High School.

Even though his parents were wealthy people and had a lot of connections, Lenny Kravitz wanted to write his success story on his own. So he left home and rented a car in which he lived for $5 a day. His early career had a rocky start, and his first album Let Love Rule was released in 1989. Not getting much attention, he struggled hard to find his place in the music industry. When Madonna covered his song Justify My Love, his fortunes changed, and he became widely known.

Lenny Kravitz' another song It ain’t over till it’s over landed on the #2 spot on the charts. The song drew massive inspiration from his own life as he was going through the after phases of his divorce at the time.

The highlight of Lenny Kravitz career was the album Five which came out in 1998. This album won him his first Grammy award. Kravitz became so popular that he won every single Grammy award for his category for three consecutive years till 2002.

Lenny Kravitz also covered the song American Woman from The Guess Who. In 2008, he released his album; It is time for Love.
He made his film debut in 2009 with the film Precious. He also played a minor but essential role as Cinna in the Hunger Games trilogy.
He released another album titled Black and White America in 2011.

Lenny Kravitz has received several Grammy awards including the Best Male Rock Vocals. He also won the MTV video music award in 1993. In 1998, he received the Vogue Fashion Awards for the Most Fashionable Artist.

Lenny Kravitz married Lisa Bonet on November 16, 1987. Their marriage lasted a little more than five years. They divorced each other on April 12, 1993. His daughter, Zoe, is an actress.

Lenny Kravitz has also been linked romantically with model Adriana Lima. They were even engaged at one time but called off the marriage. Kravitz suffers from a severe bronchitis condition and has had to cancel several tours because of it.