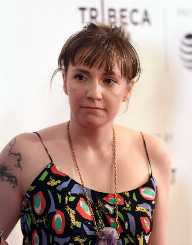 Lena Dunham is an actress on TV and in the film.  She is also a director, producer, and writer including the HBO series “Girls.”

Lena Dunham was born on May 13, 1986, in New York City. New York.  Her father Caroll is a painter and her mother Laurie is a photographer.  She has a sister, Grace Dunham, who is an actress.

Dunham spent her K-12 years at Saint Ann's School in Brooklyn, New York.  She later attended Oberlin College.  She has a degree in creative writing.

Lena Dunham wrote plays and short films during her college years.  She even produced a web series called Delusion Downtown Divas once she was out of college. It was in 2010 that her short film Tiny Furniture received praise and numerous awards including Best Narrative Feature at the South by Southwest Film Festival.  She wrote, directed, and starred in that film as well.

Even though Dunham's education did not include acting, she became the star in many of her works and had small acting parts in TV and film. She had roles in This is 40, Scandal, American Horror Story, and even the Taylor Swift:  Bad Blood video short.

Lena Dunham gained the attention of writer and filmmaker Judd Apatow who got her to be an executive producer in the HBO original series Girls. Not only did Dunham create the series, but she also wrote, directed, and starred in the episodes.  The series ran from 2012 to 2017Dunham's next project is a TV series called Camping.  She created and wrote for the new series that will air in 2019.

Lena Dunham dated Jack Antonoff, a musician from the band's Bleachers, Steel Train, and Fun.  They were together from 2012 to 2017.

Lena Dunham struggled with the pain and complications from endometriosis.  After trying numerous non-surgical remedies, she had surgery in 2017.

In 2015, Lena Dunham was recognized by Variety Magazine's Power of Women Initiative for her work with Girls Education & Mentoring Services for supporting young female victims of sexual exploitation and trafficking.

Writers Guild of America (WGA) Award, New Series, 2013
#2 on the New York Times Bestseller list for Not That Kind of Girl

Not That Kind of Girl:  A Young Woman Tells You What She's Learned, 2014