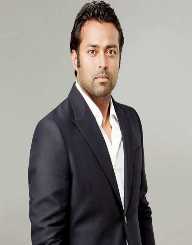 One of India’s most celebrated tennis players, Leander Paes is world famous primarily for his prowess in the doubles and mixed-doubles formats of the game. He also holds the record of being the oldest man in the history of tennis to have won a Grand slam title – he has won a total of 14 Grand Slams of which 8 are doubles, and six are mixed-doubles titles.

Leander Paes has also represented India in the Olympic Games on six different occasions. Paes has inspired man young Indians to take up tennis as a career.

Leander Paes was born on June 17, 1973, in Kolkata. His star sign is Gemini. His father Vece Paes was a professional hockey player and his mother Jennifer had been the captain of the Indian Basketball team. Naturally, young Paes was athletic and had an inclination towards sports from the start.

Leander Paes was first enrolled in the La Martiniere School and later got admitted to the St. Xavier College. Right from the early age, he was inclined towards a professional career in sports and practiced at the Britannia Amritraj Tennis Academy. He was 12 at the time when Dave O’Meara coached him.

Leander Paes started his international career by taking part in the Wimbledon Junior Championship in 1990.  He won the competition and became the world number one. These were the beginnings of a professional career that spans almost three decades.

In 1992, Paes participated in the Olympic games for the first time. He was paired with Ramesh Krishnan, and they managed to reach the quarter-finals.

In 1996, Leander Paes created history. He won a bronze medal and brought India their first individual medal after more than four decades. Around this time, he also befriended Mahesh Bhupathi (another tennis player from India), and they formed a successful doubles pair.
They reached the semifinals of three major Grand Slam events – The Australian Open, the French Open and the US open in 1998. They were soon recognized as a formidable pair in tennis.

They rewrote history twice in the year 1999 by winning both the Wimbledon and the French Open doubles titles. They became the first Indian pair to achieve this feat.

In 2003, Leander Paes paired with Martina Navratilova, and they went on to win the mixed doubles titles at the Australian Open & the Wimbledon.

In 2006, Leander Paes won the gold medal at the Doha Asian Games along with Mahesh Bhupathi. Shortly after, however, the duo parted ways due to some misunderstanding between them. That was the end of one of the very successful partnerships of tennis history. He also won the gold in the mixed doubles category together with Sania Mirza. Paes also won the doubles title at the US Open with Martin Damm in the same year.

Leander Paes' partnership with Cara Black was also a successful one. They went on to win the US Open in 2008, and the Australian Open in 2010. In 2010, he joined the Board of Directors of the Olympic Gold Quest to nurture players who had the potential of winning gold for India at the Olympics.

In his career, Leander Paes has partnered and played with several top players throughout the world. His feud with Mahesh Bhupathi has also been one of the highlights of his long career.

Leander Paes has won 14 Grand Slam doubles tournaments – 8 doubles and six mixed doubles. He was the only player in the 1996 Olympics to win an individual medal for India – he won bronze.

For his achievements, he was presented with the Rajiv Gandhi Khel Ratna Award in 1996. He was also honored with the Padma Shri in 2001 – India’s fourth highest civilian award.

Leander Paes' personal life has attracted media attention quite a few times. He first dated a Bollywood actress named Mahima Chaudhary. The relationship didn’t last long, however.Paes then started dating Rhea Pillai – ex-wife of actor Sanjay Dutt. They had a live-in relationship and produced a daughter, Aiyana. They are separated now, and the dispute over custody of Aiyana is going on.