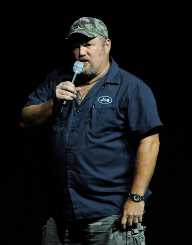 Daniel Lawrence Whitney is famously known as Larry the Cable Guy. He was born on February 17th, 1963 in Pawnee City, Nebraska. He is a famous stand-up comedian and a country music celebrity. Larry is also a former member of Blue Collar Comedy Tour. This was a comedy troupe with other members including Jeff Foxworthy, Bill Engvall, and Ron White. Throughout his comedic personality, Larry is credited with seven comedy albums. Three of these albums have been gold certified by Recording Industry Association of America (RIAA). He also earned several followers after featuring in the History channel in the 2011 show Only in America with Larry the Cable Guy.

At the time of his birth on February 17th, 1963, Larry the Cable Guy was given the name Daniel Lawrence Whitney. Larry was raised from humble beginnings because he was brought up on a pig farm. His parents were Tom Whitney and Shirley Whitney. His father was a Christian minister and a guitarist entertainer. Larry enrolled for his early education at The King's Academy. His father was the principal of the elementary school of the same institution. Shortly after, he went to Berean Christian School after which he joined the Baptist University of America for his college education. At some point, he also attended the University of Nebraska.

At the beginning of Larry’s career during the 90s, he featured on the nationally broadcasted show called The Ron and Ron Show. Besides this, there were other shows that he featured in such as The Chris Baker Show which was aired on KDGE. On KEZO he featured in The Todd and Tyler Show.

The beginning of his stand-up comedy career was not a smooth one. During the early stages of his comedic career, Larry used his real name for his stage performances. Unfortunately, Larry did not perform well. Nonetheless, this changed after coming up with Larry the Cable Guy character. This is the character that he still maintains in his successful shows. It involves a personality of an individual with a thick Southern accent. Most of his hilarious comedies describe his early stages of his life. His fans grew to love him for his catchphrase - Git-R-Done. Gaining success with his new character, Larry went on to release his first comedy albums namely Lord, I Apologize -2001 and later on The Right to Bare Arms in 2005. The hit albums got gold certifications from RIAA. His third comedy album was released two years later in 2007.

Apart from cracking people’s ribs, Larry was featured on TV in 2011 in the series Only in America with Larry the Cable Guy. He gained a large number of followers following his role that he played during the entire TV show which ended in 2013. In 2012, he joined the film industry where he lent his voice in Cars 2. He is also expected to reprise his role in Cars 3 which is to be released in 2017. Other films that he has also featured in include Witless Protection – 2008, Tooth Fairy 2 -2012, A Madea Christmas – 2013, and Jingle All the Way 2 – 2014.

Larry tied the knot with his wife named Cara in 2005. The pair has two children, a son, and a daughter. He is a fan of Nebraska Cornhuskers football team.