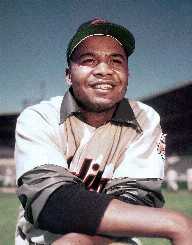 Larry Doby was born on December 13, 1923, in Camden, South Carolina. He was an American baseball player who played in the Negro leagues and Major League Baseball.

He became the second African-American player to break the color barrier in baseball. His career began at Long Island University on scholarship as a basketball player. He played professional baseball for the Newark Eagles before he was enlisted in the United States Navy during the Second World War.

In 1946, after the war, he embarked to join his team the Newark Eagles for the Negro League World Series. With the Eagles achieving a win, he was approached by Bill Veeck who signed him up to play for the Cleveland Indians on July 5, 1947. He became the second black player in the major leagues and first in the American League when he played for the Cleveland Indians.

Larry Doby also played for the Chicago Sox, Detroit Tigers, and Chunichi Dragons and retired in 1962. He was appointed as the second black manager for the Chicago Sox in the Majors. In 1995, he served as one of the executives at AL offices and later as director of the New Jersey Nets. In 1998, He was inducted into the National Baseball Hall of Fame. He died in 2003 aged seventy-nine years.

Larry Doby was born Lawrence Eugene Doby in Camden, South Carolina on December 13, 1923. He was the son of David Doby and Etta Brooks. His father was a war veteran in the Second World War and also a semi-pro baseball player.

His parents separated while he was still young and was left in the care of his grandmother in Camden. His father was involved in a tragic accident in New York State and drowned. Between 1934 and 1938, he lived with his father’s in-laws where he studied at Jackson School. He began playing baseball while still a student at Boylan-Haven-Mather Academy under Coach Richard Dubose.

At the age of 14, he joined his mother at Peterson and attended Paterson Eastside High School. At Eastside, he ventured into basketball, baseball, football, and track racing. After graduating from high school, he accepted a basketball scholarship at Long Island University in Brooklyn. He had also agreed to play for the Newark Eagles of the Negro National League in 1942.

Larry Doby was signed up for the Eagles at the age of seventeen for 300 U.S Dollars in 1942. He played his first game on May 31 against the New York Cubans at Yankee Stadium. However, he was enlisted in the United States Navy which brought a halt to his baseball career for two years. In 1946, he was released from service and was reunited with the Newark Eagles.

Together with his teammates Monte Irvin and Johny Davis, they gave their team a win at the World Negro World Series. At that time, Cleveland Indians manager Bill Veeck was searching for a black player to join his team. Doby signed a contract with Veek in and made his debut as the first black player in the American League on July 3, 1947.

With a finish of a .301 average by 1948, he had led the Indians to a victory at the World Series against Boston Braves. He gained widespread recognition as he was named to seven consecutive American League All-Stars teams.

In 1955 Larry Doby's performance at the Indians went down due to an injury and was signed up with the Chicago Sox. By 1956, he had played in several teams including the Baltimore Orioles, Cleveland, and the Detroit Tigers.

In 1959 league against San Diego Padres, he broke his ankle which affected his career at major league. He joined Japan’s Chunichi Dragons in 1962 and played for one season before moving to Newark, New Jersey. In 1977, he was appointed as Coach for the Chicago White Sox and later became its manager in 1978.

After a poor performance with the White Sox, he was replaced and got a job as director of Community Relations for the New Jersey Nets of the NBA. In 1990, he served as an assistant for licensing arising matters to the president of the American League.

Larry Doby married Helyn Curvy in 1946, and they had five children. He also had six grandchildren and four great-grandchildren. He was diagnosed with cancer of the kidney in 1997 which led to his kidney being removed.

His wife died in 2001 after succumbing to a battle against cancer for six months. On June 18, 2003, Larry Doby died of cancer in Montclair, New Jersey at the age of seventy-nine.