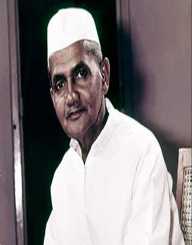 On 27 May 1964 Jawaharlal Nehru, the prime and central figure of Independent India died due to a heart attack. It was devastating news, but true that he was no more. Questions started to steam spicy India, from Kashmir to Kanyakumari. The Congress Party leaders thought intensely on who will come to replace Nehru. Finally, it was determined that Lal Bahadur Shastri was the only individual that fitted Nehru's position.

Lal Bahadur Shastri was a short man who had wide eyes and lean body. He was decent both inwardly and outwardly. His words uttered wisdom that was almost unheard due to his soft voice. But there was a hidden smile behind this nobleman. It wasn’t a sign of achievement or pride, but he proved that he could govern a realm of over six hundred million citizens. Other people doubted him, but it was true that he didn’t have time to praise his ancestry. On the contrary, he was a man of the people: not bright but ordinary in his way.

Lal Bahadur Shastri never thought or dreamt of power, but authority and jurisdiction searched his noble soul. There is one thing that crowned his baby-shaped head: Fame. He defined ability and beyond at its best. He showed this through his active life. Although he was tender like a flower garden, he could at times change into a hard diamond. It wasn’t by chance that Lal Bahadur Shastri refilled The Four Corners of the world with nothing else than the excellent reputation of India.

It came to a point where the world praised him as Numero Uno and the only builder of peace. By the time he tried to touch the true pinnacle of his life, Lal Bahadur Shastri's death had come to close his eyes. He passed away like a shot, and in a flash, he was no more. He rose to fame abruptly, and he left the globe without a warning sign.

2nd October is known as an important occasion in India. Both young and old celebrate Mahatma Gandhi Jayanti. It was the same date and month that Lal Bahadur Shastri was born but in 1904. He spent his childhood life in Varanasi, United Province of British Raj. At only one-year-old, Lal’s father died, and her mother opted to take her three children to her father’s house.

Despite the impoverished life that dogged his thoughts, he managed to study at the East Central Railway Inter College. His feet felt the streets burns since he walked barefooted to and from school. Lal Bahadur lacked basic needs, but he embraced patience, selfless and adventure from his childhood life. He loved to read different fictional books especially Guru Nanak’s scripts.

In the mid of 1920, Lal Bahadur Shastri joined Indian Independence movement where Mahatma Gandhi's ideas inspired him. He then teamed up with a nonviolent civil movement called Salt Satyagraha. He befriended prison for two years. This encouraged him to serve as the Organizing Secretary of the Parliamentary Board in 1937. After some months he was then sent to jail for a year for joining the Satyagraha movement.
In 1942 Lal Joined Mahatma Gandhi’s Movement where he was later imprisoned.

After India achieved independence, Lal Bahadur Shastri was selected as the Police and Transport Minister under Uttar Pradesh. He then served as the Secretary General of All India Congress Committee by the end of 1950. The following year he was appointed to chair the Ministry of Railways and Transport seat. He took the position seriously where citizens came to love his devotion and hard work. Unfortunately, he resigned in 1952. After five years, Lal was then placed in the Commerce and Industry space, and after four years, he was elected as a Home Minister.

In 1964, Jawahar Lal Nehru passed away, and Lal Bahadur was appointed as the second prime minister under the Congress Party. During his doctrine, Lal led the India-Pakistan war that occurred in 1965. It was at this time that he embraced the Jai Jawan Jai Kisan slogan-hail the soldier, hail the farmer.

After the India-Pakistan war, in 1965 and Lal joined an annual summit in Tashkent. He partnered with President Muhammad Ayub Khan of Pakistan, with both signed a peace agreement called Tashkent Declaration.

Lal Bahadur Shastri majored in different ministries during his rule. He dealt with unemployment, food shortage, and poverty. He is the one who introduced The Green Revolution that helped to eradicate food shortage.

Lal Bahadur Shastri became the first person to receive the highest civilian award, Bharat Ratna in India. He married Lalita Devi in 1928 by whom he had six children: Ashok, Sunil, Anil, Kusum, and Krishna. Ashok died at 37 years old while Shastri died in 1966 the day after he signed the Tashkent agreement. It is still unclear of what caused the death of an Indian Hero. His death remains a mystery.

One of the famous Airports was honored after his name-Varanasi International Airport.