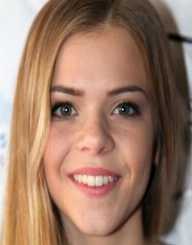 Kelsey Calemine was born on January 14, 1999, in Los Angeles, California, United States of America. She is an American Instagram star. She is eighteen years old. She has over eight hundred thousand followers on Instagram. She loves posting photos of herself on Instagram and taking her hairdos. She likes experimenting with her hair, and she has dyed her hair several times with different colors. It is said that she looks like Lucy Hale, an actress in the series ‘Pretty Little Liars’ and Kylie Jenner.

Kelsey Calemine became popular on Instagram when Lucy Hale posted her photo on her Instagram and Twitter accounts asking her fans if they looked alike. The posts received positive reviews, and every one of her fans wanted to know who Kelsey was. Lucy Hale also noted that Kelsey somehow looked like television reality star, Kylie Jenner. Kelsey is considered a fifty-fifty match between the two celebrities.

Kelsey Calemine is very friendly and social. She is charming and beautiful. She has an allure to her that people love. She is an Instagram star who has made it on the social media platform. She loves posting photos on her Instagram account of her impressive style and hairdos. She enjoys experimenting with her hair as she loves trying out almost everything. She loves dying her hair with different colors. Lately she has her hair dyed blonde a look that she loves most than her brunette hair. She said in an interview with Galore Magazine that with blonde hair she explores so many different styles. She loves dying her hair like her celebrity look-alike Kylie Jenner.

Kelsey Calemine is a fan of Emma Bunton who appears on the Spice Girls. Emma is has been her inspirations since she was a child. People believe that her eyebrows and pout look like those of Lucy Hale and Kylie Jenner respectively. She continues to post photos on Instagram and she is not relenting from what she loves. She is a high spirit and loves spending time with her friends and family. Not much is known about her personal life as she loves to keep her private life secret. She has not been involved in any controversies and she loves her status that way.

Kelsey Calemine was born and raised in Los Angeles, California, United States of America. She is said to have a younger brother though not much is known about her and her family. She became a famous social media personality significantly because of her resemblance to Lucy Hale and Kylie Jenner. The idea that she has similar facial features with the celebrities has drawn many followers to her.

She loves keeping her personal life personal hence not much is known about her family of about her previous life before she became popular on social media. The Galore magazine interviewed her because of her resemblance to the two celebrities. She is currently dating Asher Brown.