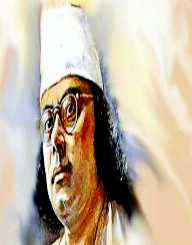 Bengali poet Kazi Nazrul Islam was born on the 25 May 1899 into a family of modest means in the village of Churulia, West Bengal. He was one of four children born to Kazi Fakir Ahmed and Zaheda Khatun. His father was an imam and caretaker of his local mosque.

After his father died in 1908, Nazrul took over his job as caretaker at the local mosque, and he also did various jobs to help support the family.

Nazrul then joined a theatrical group run by a family member where he wrote folk plays for the performers the team.

In 1917 Nazrul signed up for the British Army and was part of the 49th Bengal Regiment. He continued with his self-education: writing, discovering Persian poetry and composing music. Life of a Vagabond was published in May 1919 and followed the same year by his poem Freedom which appeared in the Bengali Muslim Literary Journal in July 1919.

Nazrul left the Army after three years and settled in Kolkata working for the Bengali Muslim Literary Society. In 1920 his first novel Freedom from Bondage was published, and he also released a poetry collection. Both his poetry and prose were well received and established him as a writer. Around this time he met Rabindranath and was strongly influenced by him.

Nazrul published Bidrohi in 1922, and this poem made his name. The same year he began publishing a magazine Dhumketu. Political poetry published in the magazine resulted in his arrest in September 1922. He was jailed in Kolkata and in protest started a fast which lasted over thirty days. After his release in December 1923, Nazrul's work reflected his time in prison, and some of his works were banned as a result.

Nazrul was critical of the Indian National Congress for not fighting for political independence from Britain. Becoming more politically active, he was a founding member of the Sramik Praja Swaraj Dal party. And was the publisher and editor of Langal, which was associated with the party.

His book Pralay Shikha was banned in 1930, and he was jailed for sedition. Later, after the Gandhi-Irwin Pact was negotiated, he was released. A further collection of essays, Modern World Literature, was published in 1933 and he continued producing songs, many of which based on classical ragas.

Nazrul was the first Muslin director of a Bengali film, having made Dhruva Bhakta which was based on a play of his. He was also musical director for Gora, a movie based on Tagore’s novel and he worked in Calcutta Radio’s music department.

Nazrul was against fanaticism in any form and promoted equality, humanism, and harmony in his writing. These beliefs sometimes led to criticism from fundamentalists.

From 1940 Nazrul was editor of the newspaper New Age. His friend and mentor Rabindranath Tagore died in August 1941, and he wrote Rabi Hara in his honor.

In the early 1940s, Nazrul fell ill suffering various symptoms as well as depression. He was admitted to hospital in 1942. By 1952 he was still suffering from his symptoms including depression. Nazrul was sent to Vienna for evaluation and was diagnosed by a neurosurgeon as suffering from Pick’s disease. Pick’s is an incurable disorder involving the shrinking of frontal and temporal anterior lobes of the brain.

Nazrul returned with his wife to Kolkata in late 1953. His wife died in 1962. With the blessing of the Indian government, Nazrul went to live in Dhaka, Bangladesh in May 1972 where he was awarded citizenship.

In 1972 the Bangladesh government designated Nazrul, their national poet. He received many others awards, honorary degrees, medals, and acknowledgments.

Kazi Nazrul Islam died from Pick’s Disease on the 29 August 1976.