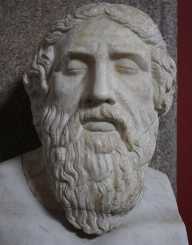 Despite being one of the most famous poets in history, there is little that history knows about Homer. He was of the Greek descent and wrote some of the best epic stories of all times. Some of these stories are The Odyssey and The Iliad that still resonate with the current generation. His work took root mostly in Western cultures thus influencing many people’s work. Some believe that Homer was alive in the period between the 12th and 18th Century BC. They also purport that he was born along the shores of the Asian Peninsula.

Through the ages, many people have been looking into the mystery of Homer's birthplace. However, none have been able to get the exact location. Although, there have been speculations that he was born along the coast of Asia Minor. This is even though many other cities are laying claim to Homer as their own. The dialect of his work is giving a strong sense of support to where he was born. Linguists have been able to single it out as Asiatic Greek.


The Life of Homer

The experts draw out the life of this mysterious figure from looking at the various works that he did. Besides, many attempts to recreate the experience of homer throughout the centuries have been made. Some agree that Homer might have been a blind guy. They came to this conclusion based on The Odyssey that speaks of a blind poet by the name Demodokos. They took this as a signal of Homer describing his own life. Therefore, through the ages, many artists have given tribute by scalping many statues of Homer. However, they depict him as a blind man with curly hair.

The Anonym of ‘Homer’

Through the years there have been debates on the mysteries that surround the persona, Homer. His birthplace eludes many historians also some of the work that he did. There have been questions whether some of his masterpieces were all his work or the contribution of many people. Therefore, then came the birth of the ‘Homeric question.' The gender of Homer has also been lost in history as nobody recognizes who Homer was. The works of Homer first got a publication in 1488 CE in Florence in the hands of Chalcondyles. This saw to a more significant influence on the Greek culture amongst many others. Also, most of his work got to appear in art, literature, and comedy.

The Masterpieces of Homer

Throughout Homer's work life he made attempts that have taken root in many cultures to date. However, the compilations of most some of his famous work is what has kept the name of Homer on the tongue of many people. His poems Iliad and Odyssey have given many people the insight into the ancient lifestyle of the Greeks. Also, he took the time to venture into the mythological events. Some of these include the story of Trojan War, Paris kidnapping of Helen and Siege of Troy.

Later in life, he wrote the Odyssey after the fall of Troy. However, there has been a contradiction on who the author was. This is because the craftsmanship displays a significant difference and century apart. Also, the other historians say that they were decades apart. However, what is clear is that the author was a mature one at the time. Therefore, Homer must have written the Odyssey at a much older age.

Furthermore, in his later work, he made a point of using a much liberal approach of simile and metaphor. This has been the inspiration of many writers in recent decades. Some of his other famous work includes the Homeric Hymns.

The teachings of Homer are still taking root in the current society. Also, they are shaping the mind of young artist and writers of the modern age. Therefore, this means that his reach has gone beyond the borders of Greece. The reach is capturing the hearts of many nations. The Odyssey and the Iliad are some of the work that has been helpful in the shaping of young artistic minds. The Greeks still celebrate Homer as the don of their culture amongst others. However, Homer's life is still a gap that many people are trying to fill. They are doing so so that we can get a better understanding of the person.