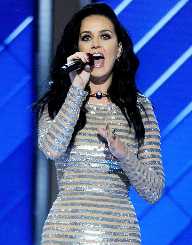 Katy Perry is one of the top highest earning female musicians in the world. She is a pop musician best known for her new wave and electro pop influenced chart topping music. She is an A-list celebrity, musician, business woman and all round success.

Katy Perry was born on the 25th of October 1984. She is the second child of two Pentecostal pastors, Mary Christine, mother and Maurice Keith Hudson, father. She has two siblings. An older sister, Angela and a younger brother, David who is also a singer and song writer.

According to Katy Perry, she grew up in the poorest area of Santa Barbara and her family often had to live on food stamps and food banks. She grew up under the strict principles of her religious parents.

At the age of nine, Katheryn had started copying her sister and practicing how to sing by listening to cassette tapes. She showed her knack for singing by performing before her parents who then encouraged her to take singing lessons.

Katheryn Hudson schooled in Dos Pueblos High School, which she left as a freshman at the age of fifteen after completing her GED. Upon leaving high school, she spent a short time at a music conservatory in Santa Barbara called the Music Academy of The West where she studied Italian Opera.

Katheryn’s singing attracted Rock Artists, Steve Thomas and Jenifer Knapp who took her back with them to Nashville Tennessee to fine tune her song writing. She started to write songs and produce demos. She was signed by Red Hill Records with whom she produced her first album. Her ten-track album was a rock and contemporary Christian music album which explored childhood, adolescent and faith themes. It had songs like Piercings, Trust in Me, My own monster, Growing Pains and Faith Won’t Fail. To promote the album she went on a tour that visited universities, churches, theaters, and cafes in forty-five cities like Houston, Malibu, San Antonio, Dallas etc. She got mixed reception and for her efforts sold less than 200 copies. The bankruptcy of Red Hill Records marked the end of Katheryn Hudson’s career in Gospel music.

She moved to Los Angeles when she was seventeen and was signed up by a Def Jam Music Group affiliate, Java. She first began to perform as Katheryn Perry, dropping her surname for her mother’s premarital surname, Perry. This was to avoid being confused with the actress and name sake Kate Hudson. She later swapped Katheryn for Katy and became popular as Katy Perry. After being dropped by Def Jam she was signed and later dropped by Columbia Records with only minor successes in her wake. She was finally signed with Capital Records where the song that spiraled her into unending success was produced.

She recorded her hit song ‘I kissed a girl and I liked it’ and released it on April 28, 2008. It was written by the contributed efforts of Katy Perry, Producers Dr. Luke and Benny Blenco and additional contributions of Max Martin and Cathy Dennis. It was to be the lead single from her later released album, One of The Boys.

The hit single’s inceptions began with strong resistance which may have even led to Katy Perry being dropped by Capital Records. However, the senior vice president of promotion, Dennis Reese saw it’s potential. Notwithstanding fears of bad reception and criticism among Christian conservatives for its homosexual themes, the song was played on a national radio, WRVW where it quickly gained popularity and increased demand. Soon after, it became a nationwide hit single. It topped the Billboard Hot 100 Charts for seven weeks consecutively. It held the number one of the music charts in several countries like France, Italy, Sweden, Switzerland, Austria, Canada, Official German Charts, several other countries and European Hot hundred singles. The hit new wave pop single has sold more than Fourteen million digital records with more than 4.6 million in the United States alone. In the groundswell of the success of this hit single, she continued to release sensational singles that culminated into the release of her second studio album One Of The Boys, released on June 17, 2008

She was invited to host MTV Europe music awards in November 2008 and in 2009. This was the first time a celebrity will host the show two consecutive times. She was also once a guest judge on the American Idol

Next Katy Perry released the hit single California Girls on May 7, 2010, as lead single for her next album Teenage dreams. The new wave, electro pop influenced pop song made number one on Billboard Hot 100 for six weeks consecutively. The album Teenage Dream debuted number one on Billboard 100 upon its release on August 24, 2010. Her other singles Teenage Dream, Firework, E.T featuring Kanye West, Friday Night (TGIF) continued to debut at the top of the charts making her the first artist to spend sixty-nine consecutive weeks at the top ten of Billboard Hot 100 charts.

Apart from Music, she also made a couple of appearances on Saturday Night Live. She starred in an Episode of series Raising Hope and an episode in How I Met Your Mother. Her featured in her first movie, Smurfs as the voice of Smurfette. She later released her own autobiographical film which featured her brother. Katy Perry: Part Of Me was produced by Paramount pictures and grossed over  32.7 million dollars in the worldwide box office.

As a business woman, she became the owner of her own line of fragrances and shoe line among other endorsements and investments. She is also a humanitarian who supports several charities like, the Dave Thomas Foundation for Adoption, Elton John Aids Foundation, Generosity Water, Habitat For Humanity, Grammy Foundation, Red cross and UNICEF.

Katy Perry is a bodacious woman with a quirky over the top sense of style. She can often be seen sporting colorful, bright, bedazzled and glistering clothes along with purple, bright pink, golden or blue hair.

She is no stranger to controversy nor does she shy away from it. Her first hit song, I Kissed A Girl suffered resistance due to its homosexual themes. The criticism was not only with the Christian conservative community. She was criticized by the LGBT community as well. They upbraided what they saw as a mere homosexual appropriation to garner attention without any interest or commitment to the LGBT community.

Her dressing has also being a source of controversy. An episode of Sesame Street could not be aired on television because of the abundance of cleavage visible in her costume. This same issue arose in an episode of Saturday Night Live where her visible cleavage in an Elmo themed costume was criticized but this was sneered at by her.

There have been rumors abound that Katy Perry is estranged from her conservative Christian parents because they condemn her entry into secular music and her lifestyle. She has denied these reports as untrue and insisted that she still has a strong relationship with them. She has been seen with her parents in public events like the premiere of ‘Get Him To The Greek’ where she is pictured with her parents and her then husband Russell Brand.

Katy Perry has had her run of spotlight relationships. The experiences and failures of which are rumored to have inspired and showed up in themes in some of her singles like the One That Got Away, Circle In The Drain, Dark Horse and such like.  She has dated Actor John Lewis, had an on and off relationship with front man of the band Gym class heroes Travie McCoy. She had a whirlwind romance that led to marriage with comedian, actor and author, Russell Brand that crashed in fourteen months.  She has had other actual and rumored relationships, the most recent being with veteran producer Diplo.

From her first single and the duration of her career, the Pop sensation has held many firsts and mosts even earning her a couple of Guinness World Record awards. One of this is Guinness World Records 2010 ‘Best Start On The Us Digital Chart By A Female Artist’. Katy Perry was the first female artist to have five No.1 singles from one Album for her album, Teenage Dream in August 2011. As a public personality, she has held the record for Celebrity with the most twitter followers since 2014 with 90 million followers as at June 2016.

She held the spot for Best Selling Digital Artist in 2014. She is right at the top as highest earning female pop star, grossing over 165million dollars as at 2016

A surplus of awards and nominations have also trailed her career. She won 2008 MTV Europe Music Awards International for best female solo artist. She got the award for Best New Act at the 2008 and 2009 Brit awards. She has had two Grammy nominations.

For her foray into film, she won the People’s Choice Awards for Favorite TV Guest Star for her role as Honey in the episode Oh Honey in How I Met Your Mother.

Katy Perry has also been awarded for her humanitarian efforts one of which is the UNICEF Award presented to her by Hilary Clinton.

Despite all these, the 32-year-old pop sensation is not slowing down.