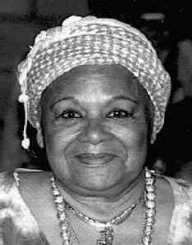 Katherine Dunham was born to a French –Canadian woman and an African American man in the state of Chicago in America. Her birthday was 22nd June in the year 1909. At an early age, Katherine Dunham was already singing at her church. Katherine's stint at the Joliet-based Methodist church was one that prepared her for a dancing career.

Although Katherine Dunham never worked on dance at her early age, fate played a fast one on her as she grew older. Following her family’s nudge, she attended the University of Chicago to earn her degrees in anthropology. Katherine completed her bachelors as well as masters and doctoral degrees in a pleasant succession.

Katherine Dunham's brother, Albert Dunham Jr, also attended the same university with her. She is reputed among the early breed of African American women to have completed their studies at the University of Chicago.

Katherine Dunham started out with a dance group to perform at select events as she considered themes in classical and African dance routines. Katherine was keen to explore the native African creative expressions, and she sought for avenues to explore and showcase same.

Ballet Nègre was the name of her performing group, and they performed first at the Beaux Arts Ball in the state of Chicago in the year 1931. The team did not have any engagements after that, and it was disbanded.

One of Katherine Dunham other early performances was with Ruth Page’s stage performance group. The stage show was called The Devil Woman, which was adapted from Martinican folklore. Dunham had a couple of performances at the Chicago Opera during this period and was an assistant to Ruth page.Katherine Dunham formed her dance company

in the year 1940, and it was comprised of African Americans alone. The Dunham Dance Company came up with the Dunham Technique that was a mix of American ballet, Caribbean ethnic dance routines and a blend of theatrical effects.

Katherine Dunham made the Broadway debut and performed on a series of musicals there over the years. Her performances included films, stage shows, and several ballets. Katherine Dunham did Pardon My Sarong in the year 19

42, and Stormy Weather came along in 1943.As her influence spread and her experiences mounted, Katherine Dunham started off the Katherine Dunham School of Dance and Theatre. This was opened in New York City with courses in the performing arts, drama, dance cultural studies, humanities as well as Caribbean research.

In The Eye Of The Storm

Katherine Dunham was in the eye of the storm in 1980, when her entourage was turned away at a five-star hotel in Brazil. She was credited to have made a storm over the incident with extensive publicity across many channels.
This storm led to the promulgation of the Afonso Arinos Law, which made racism an act of felony in the South American nation of Brazil.

Katherine Dunham went on to write a couple of books to document her childhood experiences and the lessons she picked up in her like walk.

Katherine Dunham also churned out a series of articles during her years on earth that spotlighted the research she carried out in anthropology.

Katherine Dunham was committed to human rights, equality, and social justice. These were all themes that recurred throughout the years of her existence.

Katherine put herself at high risk when she embarked on a hunger strike that lasted for 47 days in the year 1992. She was protesting the turning way at the border post of Haitian boat people by the US immigration.

Katherine Dunham is reputed as a choreographer, dancer, and performer who was a leading light in the African-American development of modern dance. She is noted for cross-cultural performances.

Katherine Dunham is also reputed for a sound sense of social justice as she once put up a performance on hold after learning that the black community was excluded from ticket sales. Dunham did not get involved in her dance teaching and practice just for the fame or fortune.Dunham believed in portraying the best ideals that will put all humanity on equal footing.

Katherine Dunham had a marriage experience that is also like a voyage. Katherine first got married in the year 1931 to Jordis McCoo. Jordis was a postal worker of African –American origins. They separated as their differences became too glaring and divorced in the year 1938.

Katherine got married to John Thomas Pratt in 1941 and John was a white Canadian with whom she had collaborated artistically since 1938. They had their marriage ceremony in Mexico as inter-racial unions were still an issue then in the US.

However, as a result of the legality concerns, they had a formal wedding in Las Vegas in the year 1949.
They had no children of their own and were able to adopt a girl, Marie-Christine Dunham Pratt, who was a year and two months old, at the time.

Katherine was adopted from a nursery run by the Roman Catholic convent in France.