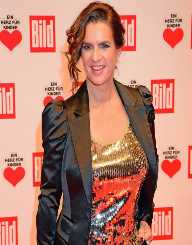 Katarina Witt was born on December 3, 1965, in Karl-Marx-Stadt, East Berlin, Germany. Her parents are Katja and Manfred Witt. She also has a brother, Axel Witt.

As a youth, Katarina Witt attended the Karl-Marx-Stadt Sports Club and School. This was a school for children who were especially athletically talented. While attending this school, she not only took educational classes but she was also trained in figure skating by Jutta Muller.

Katarina Witt began competing in professional gymnastics tournaments around the start of the 1980’s. In 1981, she earned her first major victory in the East German National Championship. In the next couple of years, she managed to win several other prestigious figure skating competitions, including earning silver medals at the World Championship in 1982 and winning a gold medal in the 1983 World Championship.

In 1984, Katarina Witt participated in her first ever Winter Olympics in Sarajevo, Yugoslavia. She skated for the East German team in the Women’s Singles figure skating event. During this event, she earned her first gold medal.

In 1988, Katarina Witt appeared in her second Winter Olympics in Calgary, Canada. Once again, she played for the East German team in the Women’s Singles figure skating event. Once again, she earned the gold medal for her country. After competing in this competition, Witt took a short break from professional competitive figure skating, until 1994 (although she continued to skate in movies and other entertainment events).

When Katarina Witt returned to professional competitive skating in 1994, she was again trained by Muller. She entered into the German Championships in this year, placing second. She also entered the European Championship, placing eighth. Also in this same year, she entered in her last Winter Olympics in Lillehammer, Norway. This time, she played for German (as East Germany was no longer a country) and played in the Women’s Singles figure skating event. Sadly, she did not earn a medal this time, as she placed seventh. After this event, she again retired from professional competitive figure skating.

Katarina Witt began pursuing an acting career in 1990. The first time she appeared on the screen was on a made-for-television HBO special titled Carmen on Ice, in which she played the titular character. After this film, she did not appear in another made-for-television movie (Greatest Hits on Ice) until 1994. Some of the other films she appeared in (mostly playing figure skaters) in the 1990’s included Die Eisprinzessin (a film which she also wrote the screenplay for), Jerry Maguire, Ronin and The Great Skate Debate II. SHe also appeared in one episode of Frasier in 1996.

In 2000, Katarina Witt appeared in one episode of the show V.I.P. In 2006, she started to produce her show, Stars auf Eis. She would go on to produce seven episodes of this show during this year. In 2009, she also tried out voice acting as the character Marilyn in the film Friends Forever.

The most recent project Katarina Witt has acted in (and the only project she has worked on so far in the 2010’s) is the made-for-television film Der Feind in meinem Leben. In this film, she simply played herself.

Katarina Witt published her first book; an autobiography titled My Years Between Compulsories and Freestyle in 1995. She later published another autobiography, Only With Passion in 2005.

Katarina Witt was awarded the German Golden Camera Award in 1994.
She was inducted into the World Figure Skating Hall of Fame in 1995.
For her acting career, Katarina Witt won a Primetime Emmy in 1990 for her Outstanding Performance in a Classical Music/Dance Programming for Carmen on Ice.