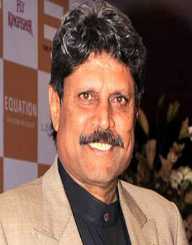 Kapil Dev is a legendary cricketer. His aggression and determination in his team earned him the suitable nickname the Haryana Hurricane. He was a fast bowler and dexterous batsman and a leading one in his time. He overcame tremendous odds to achieve his reputation. He is still being celebrated today as a living legend.

Kapil Dev was born Kapil Dev Ram Lal Nikhanj on the 6th of January 1959 in Chandigarh India. His parents were, Ram Lal Nikhanj, his father, Raj Kumari, his mother. They were initially from Rawalpindi, Punjab.

Kapil Dev had been interested in Cricket since he was a schoolboy. He schooled in D.A.V. School and later went to St Edward School in Shimla. He was soon spotted as a budding cricketer and taken up into the local cricket team, Haryana.

Kapil Dev joined the Haryana Cricket team in 1971. He started to become a noticeable cricket sensation from his debut match in 1975.

Kapil Dev helped his team win several matches and where they did not win he kept the nation on its toes with his impressive play. His remarkable play season after season got him selected for the Irani Trophy, Duleep Trophy, and Wills Trophy Matches.  In the first trophy match, he stood out with 62 runs, coming in at number 8. By the end of the Duleep Trophy match, he had come into the national public eye. In his play at the Wills Trophy Match, he was spoken of by veteran cricketer, Sunil Gavaskar, that after a long, long time there was finally a promising and fast Indian bowler.

Kapil Dev was a genuine all-rounder, not as it was used in the loose definition. He had an extraordinary swing. He was fast. He was a swinger in a time when spinners were most dominant. He was also a great striker. He was great with the ball and bat and surmounted heights in both departments.

In the 1979/80 season Kapil Dev scored his first century in the match against Delhi and established himself as a member of the Indian national team.

Kapil Dev became the captain of the National cricket team and led the team to world cup victory in 1983. He was reappointed captain in 1985 when he led India in the Test series win on their England tour

On February 1994 he set a new record surpassing, the Sultan of the swing, Sir Richard Hadlee’s long-standing record of 431 test wickets. After this feat, Kapil Dev retired in 1994.

This was not to be the end of his cricketing career. Kapil Dev was appointed coach of the Indian national cricket team in 1999. This was however short-lived as he became wrapped up in a controversy that led him to give up his post. During his ten-month term as a coach, India won only one Test match. It was a home match against New Zealand.

Kapil Dev became chairman of India’s National Cricket Academy in 2006. He was removed from his role when he became an executive in a private cricket league, the India Cricket League (ICL). He was there from 2007 till he left in 2012.

Kapil Dev as a cricketer was known for his charismatic and graceful trademark play. He was however faulted for his inconsistent performances. He has a checkered history of successes along with what was sometimes described as a lackluster performance. This was not often enough to prevent him from making a place among the legendary cricketers of his time. He made his mark as the only player in the history of cricket to have taken more than 400 wickets (434 wickets) and scored more than 5,000 runs in Tests.

The tail end of his cricketing career was not all glorious. Kapil Dev was changed from being a captain a couple of times due to inconsistent play. It was said of him that he had a dwindling spirit of sportsmanship.

His career as a coach was short-lived due to a match fixing controversy in 1999. Kapil Dev was cleared of the allegations by India’s Central Bureau of Investigation. Upon his departure as coach of the national team, he expressed his regret at the circumstances surrounding his departure saying, “I bid adieu to the game that gave me so much and then took a great deal of it away on the mere hearsay of a third party.”

Years later he also had to relinquish his role as Chairman of the National cricket team when he became an executive in the India Cricket League (ICL). This was a private league, and the action was frowned upon by the BCCI. They thus revoked the pension of all who joined the private league, chief of whom was Kapil Dev. He, however, returned to the good books of the BCCI when he left the executive of ICL in 2012.

Kapil Dev is married with a daughter. He was introduced to Romi Bhatia through a mutual friend. She became his wife in 1980. They had their daughter, Amiya Dev in 1996.

Kapil Dev is very much alive and still being honored in many circles. He has made plans to be of immense benefit to society upon his death. He had pledged his organs to be donated in an event organized by the Delhi Urological Society since January 31, 2014.

OTHER INTERESTS AND VENTURES

Kapil Dev took up Golf upon his retirement. He has also written three autobiographies. He titled them, By God’s Decree (1985), Cricket My Style (1987) and Straight From The Heart (2004).

Kapil Dev is also the owner of multiple businesses. He owns his own hotel and eleven restaurants among other business ventures.

He had also dabbled in acting in films. Most of these involved playing himself in roles made with him in mind. On of such movies is the Cult Movie Iqbal written by Vipul K Rawal.

Over his years as a cricketer and beyond, Kapil Dev has made several endorsements and was made brand ambassador in many establishments. Some of these include the Glaxo Smith Kline’s Boost in the 1980s and 1990s, Hajmola (1995), Standard Chartered (2003) etc.

In the year 2008, Kapil Dev joined the Indian Territorial Army as an honorary officer. He was commissioned as a Lieutenant Colonel.

The cricket legend is a multiple award-winning player. Kapil Dev has cricketer of the century, cricketer of the year and man of the series, etc. awards to his credit. This followed back to back in his peak seasons as a cricketer. In 2010 he was inducted into the ICC Cricket Hall of fame. In 2013, he was listed among the 25 greatest living legends in India by NDTV. He also received the CK Nayudu Lifetime Achievement Award in the same year.

At fifty eight, Kapil Dev has made his mark on his world. He continues to make that mark and he continues to be recognized for it. Even very recently, on the 17th of January 2017, he was inducted into the Legends Club 'Hall of Fame'. It appears there is still more to be heard from Kapil Dev.