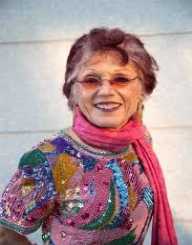 Judy Chicago is an American feminist, artist, writer, and educator.

Judith Sylvia Cohen was born on July 20, 1939, in the city of Chicago, Illinois. Her father, Arthur, was a trade union leader who worked several part-time jobs. He was an active member of the American Communist Party, which made him the object of frequent police investigations.

His liberal ways of thinking had a significant influence on his daughter. Her mother, May, was a medical secretary who used to work as a dancer. She loved the arts and passed that love onto her children. Judy’s younger brother, Ben, went on to become a potter.

Judy Chicago started taking drawing classes at the Art Institute of Chicago at the age of five. She enrolled at the University of California at Los Angeles as an art major. She received a Bachelor of Fine Arts in 1962 and a Master of Fine Arts in 1964.

At university, Judy Chicago created a series of abstract paintings featuring male and female genitals. She held her first big exhibition at the Rolf Nelson Gallery in 1965. In 1969, she created several experimental sculptures and drawings for the Pasadena Art Museum.

She continued with a series of abstract paintings, called Pasadena Lifesavers. In 1970, she officially changed her last name to Chicago. She wanted to have her name, which was not linked to any man in her life.

In 1970, Chicago became an art professor at Fresno State College. In 1971, she developed the Feminist Art Program, the first of its kind in the United States. She gathered up a group of female students to talk about their lives and the events that influenced their art.

Soon after that, Judy Chicago joined the California Institute of the Arts and established the Feminist Art Program there. She took part in the art installation Womanhouse. She also co-founded the Woman’s Building in Los Angeles.

Judy Chicago then created a series of drawings and paintings called Power Play. From 1985 to 1993, she worked on The Holocaust Project: From Darkness into Light. In 1994, she displayed her project Resolutions: A Stitch in Time. Over the next few decades, she held several exhibitions in galleries in the U. S. and the U. K.

In 1975, Chicago published a book of chronicles, titled Through the Flower. In 1979, she wrote The Dinner Party: A Symbol of Our Heritage, a book about her fabulous artwork. She followed up with Embroidering Our Heritage: The Dinner Party Needlework, which she co-wrote with Susan Hill. In 1985, she wrote The Birth Project, describing the process behind her artwork. In 1997, she published her autobiography, titled Beyond the Flower.

In 2005, she released Kitty City: A Feline Book of Hours and Through the Flower: My Struggle as a Woman Artist. In 2009, she and Frances Borzello wrote the biography Frida Kahlo: Face to Face. In 2014, she released the book Institutional Time: A Critique of Studio Art Education.

Judy Chicago won the Tamarind Fellowship, the UCLA Alumni Professional Achievement Award, and the Visionary Woman Award. She has received commendations from Duke College, Smith College, Russell Sage College, and Lehigh University. Her work is currently on display in many museums and art galleries around the United States.

In 1961, Judy Chicago married a man named Jerry Gerowitz. He suffered a fatal car crash in 1963. From 1965 to 1979, she was married to sculptor Lloyd Hamrol. She has been married to photographer Donald Woodman since 1985. They currently live in the Belen Hotel, a historic building in New Mexico which they bought and converted into a home.