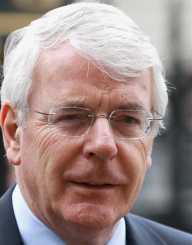 Former British Prime Minister John Major was born during World War II in Carshalton, Surrey, England. His father was a gnome-maker and traveling performer and Major was brought up in Brixton.

John Major left school at the age of 16 with three O levels and did not attend university.

Politically aware from a young age, John Major got involved in the Young Conservative movement in Brixton. At age 21, he stood as a candidate for Lambeth Council and won the seat. He then became chairman of the Housing Committee. In 1974, he stood for Parliament in St Pancras on two occasions but was unsuccessful. He then stood in the seat of Huntingdonshire in 1979 and won the seat, became a member of parliament.

John Major was made a ministerial aide in 1981, and in 1985 was made a minister. In 1987 he was appointed a cabinet minister when he became Chief Secretary to the Treasury. He was successful in this role and then led to his promotion to Foreign Secretary in 1989 followed by Chancellor of the Exchequer. After the resignation of Prime Minister Margaret Thatcher, John Major was appointed Prime Minister.

During his time as Prime Minister, John Major was involved in the first Gulf War, working alongside President George H.W.

Bush of the US as he coordinated Britain’s role in the war. In 1991, he was also involved with negotiating the Maastricht Treaty. A major incident during his time in office was an IRA mortar attack on Number 10 when a cabinet meeting was in progress. The unpopular Poll Tax introduced by the Thatcher government was abolished and was replaced by a Council Tax. During this time the country entered into a recession.

In 1992,  John Major took the country to the polls in a general election and his Conservative Party had an unexpected victory, with a record fourth consecutive win. Although the party made British electoral history by winning over 14,000.000 votes, the government majority was reduced to 21.

The following term was marred by divisions within the Conservative Party and problems with press reports of unsavory behavior by various members of Major’s government. What became known as Black Wednesday occurred on the 16 September 1992 when an economic meltdown took place. Major’s economic policies were criticised, the Conservatives reputation for sound financial management shattered, and the UK was forced out of the Exchange Rate Mechanism. This ousting from the ERM led to new policies which included flexible exchange rates, lower interest rates and a devaluation of the pound. This economic period led to resistance to the UK adopting the Euro as well as any further European integration.

John Major's government eventually oversaw a period of sustained economic growth. He is also credited with working with the IRA to end the conflict in Northern Ireland and was heavily involved in the setting up of the Good Friday Agreement which was finalized in 1998. His government was also responsible for setting up a national lottery in 1994. In 1997,  John Major was made a special guardian to the royal princess after the death of their mother, the Princess of Wales.

Britain went to the polls in 1997, and the Conservative Party suffered one of the worst electoral defeats in the history of the country. William Hague replaced Major as the leader. John Major remained in politics as an MP until the 2001 general election.

In April 2005, he received a knighthood.

John Major married Norman Johnson in 1970, and the couple has two children, a son, and a daughter.

He published an autobiography,  John Major: The Autobiography in September 2000 which received excellent reviews.

John Major was back in the political spotlight in 2002 when Edwina Currie exposed the fact that she had had a four-year affair with Major before he entered the Cabinet.