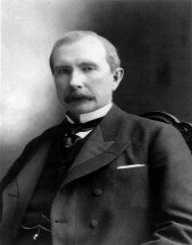 John Jacob Astor was born on 17th July 1763, to Jakob and Maria Astor. He was born in Walldorf, near Heidelberg in the Electoral Palatinate, or what is known today as Germany. He was the youngest of four children, with three older brothers. His brothers were named George, Henry, and Melchoir.

His father was a butcher, and Astor’s first job was working with his father.

John Jacob Astor's brother, Henry, ran his own butcher’s shop and John Jacob Astor was going to join him, but while traveling, he met a fur trader and was encouraged to join the North American fur trade. He worked in Henry’s shop for a time, saving his money, and he began to buy rawhides from the Native American Indians. He tanned the hides himself, and then sold them overseas, in London and other European destinations, for an immense profit. By the late 1780s, he had established his own fur goods shop in New York and had also become an agent for his uncle’s musical instruments.

John Jacob Astor was a very savvy businessman, and when the Jay Treaty was established between Great Britain and the US in 1794, he took great advantage of the new markets in Canada and the Great Lakes that had opened up. He signed a contract with the North West Company in Montreal and began to import furs from Montreal to New York. He then shipped them to Europe. By 1800, Astor had accumulated around $250,000 and was one of the leaders in the fur trade. He had agents working in the western areas, and they were extremely competitive in the industry.

The Empress of China was the first American trading vessel to land on the shores of China. In 1800, Astor followed close behind. He traded furs, teas, and sandalwood with the Chinese, and once again made a stupendous profit from the exercise.

In 1807, the U.S. government introduced the Embargo Act. This caused Astor some problems for a short while because it stopped trade with Canada. However, Astor got permission from the President, Thomas Jefferson, to establish the American Fur Company, which he did in 1808. A short while later he created subsidiaries called the Pacific Fur Company and the Southwest Fur Company. He controlled the fur trading in the Great Lakes areas and the Columbia River area. The trading post he established at Columbia River in 1811 was the first U.S. community in the region.

When war broke out in 1812, his fur trading business was interrupted because the British took over his trading posts. In 1816 though, he had joined the opium trade. The American Fur Company, which Astor owned, bought ten ton of Turkish opium, then shipped it to Canton, China. In 1817, John Jacob Astor's business was back on track. The U.S. Congress had passed a law that banned foreign fur traders from U.S. territories. Once again, John Astor company was at the forefront, controlling the Great Lakes region.

John Jacob Astor then turned to real estate. He purchased several properties on the waterfront in New York in 1799. He owned a townhouse on Broadway in Manhattan, and an estate in Hellgate, Northern New York City. In 1803, John Jacob Astor purchased a 70-acre farm. It ran west of Broadway, between 42nd and 46th streets, to the Hudson River. In 1822, he purchased the Robert Stuart House on Mackinac Island, which became the headquarters for the American Fur Company. John Jacob Astor recognized that New York would be the next big growth area. In the 1830s, he stopped all his businesses and concentrated on buying up large blocks of real estate in Manhattan. John Jacob Astor didn’t build on his land, but, instead, rented it to others for them to use. Through his astute business sense, Astor was to become the first multi-millionaire businessman in the United States.

John Jacob Astor was a Freemason and served at both Holland Lodge #8, New York City, and later at the Grand Lodge of New York.

In 1785, John Jacob Astor married Sarah Cox Todd. Sarah had good business sense, and helped Astor with his endeavors, looking after his affairs when he was away traveling.

The couple had eight children together.

Although much of his estate was left to his family, John Jacob Astor bequeathed $400,000 for the Astor Library to be built in New York.

Another $50,000 was donated to an orphanage is his birth town of Walldorf.