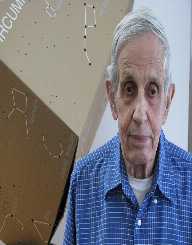 The subject of the award-winning and critically acclaimed film A Beautiful Mind, John Forbes Nash Jr. was a Nobel Prize-winning American mathematician. Nash’s most useful and famous contribution to mathematics has been his research in Game Theory, that is widely applied in a lot of areas today. What makes his achievements even more exceptional is the fact that he had schizophrenia, a rare mental condition in which a person fabricates a new reality.

Despite a problematic personal life, with the support of his wife and family, Nash became one of the world’s top mathematicians during his lifetime.

John Nash was born on June 13, 1928. His birthplace is Bluefield, West Virginia. His star sign was Gemini. His father John Nash Sr. was an electrical engineer while his mother, Margaret was a school teacher. Nash had a younger sister named Martha.

John Nash followed the usual routine of a school going boy as a kid. He was exceptional in mathematics. His educated parents understood this and encouraged him. But Nash drifted from mathematics after completing high school and opted for a degree in chemical engineering, instead. He went to the Carnegie Mellon University where he changed his subject to Mathematics. By 1948, he already had an M.S. degree at only 20 years of age.

Nash went to the Princeton University for further education and research on the Kennedy scholarship and specialized in equilibrium theory. He published several papers on the topics: Non-cooperative games and Equilibrium points in N-person games. He also published a paper on The Bargaining Problem. This work is significant because he later improved it and it is still used widely in the field of economics.

Much of John Nash's career revolved around research on the Game theory. He began his career working for the RAND Corporation. But due to a controversy relating his personal affairs, he was removed from the post.

John Nash then took up a temporary position as a teacher of Mathematics at MIT in 1951. He published several research papers next year including the one on Two-person Cooperative Games.

Nash started showing signs of mental illness by the end of the year 1957. He continued to teach Mathematics at MIT, but his condition became much worse by 1959. He had to undergo treatment for schizophrenia at the McLean Hospital.

The treatment did him little good, and John Nash wasn’t able to work until 1970 when he refused to undergo further treatment. By that time he was severely hallucinating and had fabricated a reality around him in which he regularly interacted with spies.

John Nash recovered a lot though and was able to present a speech when he was awarded the Nobel prize. Nash worked as a senior research mathematician at Princeton at the time of his retirement.

The movie, A Beautiful Mind based on the novel of the same name, is about his life and battle with schizophrenia.

John Nash was awarded the prestigious ‘Jon Von Neumann Theory Prize’ for his work on Non-cooperative equilibrium in 1978.

Sixteen years later, in 1994, he won the Nobel Prize in Economic studies for his work on game theory.

John Nash's personal life is full of controversies. He dated a nurse named Eleanor Stier and got her pregnant. When she broke the news, he abandoned her and her child.  Although the movie A beautiful Mind portrays his great mental abilities, his character wasn’t the best in real life.
He was arrested on charges of public indecency that also cost him his job.

In 1957, John married an MIT graduate named Alicia Lopez. The couple had a son together named John Charles Martin. Two years later, Nash developed schizophrenia and made life difficult for himself and his family. He continued the treatment, but his disease caused substantial damage to his marriage and Alicia divorced him in 1963.

Although separated, she was around him and supported him in recovery. In 2001, Nash & Alicia remarried and lived together till their deaths in a car accident.