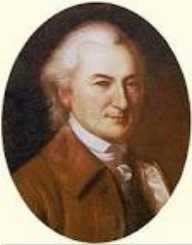 In 1731 Samuel Dickinson married Mary Cadwalader. This was Samuel’s second marriage. He was first married to Judith Troth and had eight children. On November 8, 1732, John Dickinson was born. He was one of 3 children from Samuel and Mary’s marriage.

John Dickinson was born on his family’s tobacco plantation near the village of Trappe. His great grandfather was Walter Dickinson who immigrated from England to Virginia in 1654. He was educated at home by his parents and other immigrants. At the age of 18, he began studying law under John Moland in Philadelphia. Then in 1753, he went to London to study art the middle temple for three years.

On July 1970 John Dickinson married Mary “Polly” Norris. Together they had five children. Only two of them survived through to adulthood. Those two were Maria Mary Dickinson and Sara Norris Dickenson.

John Dickinson began his career as a barrister and solicitor. In 1757 he was admitted to the Pennsylvania Bar. He published “Letters from a farmer in Pennsylvania” in the Pennsylvania Chronicle in protest to the Townshend Acts. The letters were then reprinted by several other newspapers.

John Dickinson was a proud devotee of the British Constitution. He spoke of his opposition to declaring independence when the continental congress began to debate on the declaration of independence on July 1, 1776. He refused to sign the Declaration of Independence. He voluntarily left the Congress because no one was allowed to be in without signing.

He left to join the Pennsylvania Militia. Given the rank of brigadier general, he led 10,000 soldiers to protect Elizabeth, New Jersey against British attack from Staten Island. But two junior officers were promoted above him because of his unpopular opinion of independence.

John Dickinson wrote the first draft of the Articles of Confederation in 1776. John was then appointed to be a delegate for Delaware to the continental congress on January 18, 1779. It was during this time that he signed the articles of confederation.

John Dickinson and his wife donated much of their combined library and 500 acres in Carlisle, Pennsylvania to a college named after them (John and Mary’s college-later named Dickinson College). This college was founded by Benjamin Rush.

He returned to Delaware after his service in Pennsylvania. He was elected as President of the convention that drafted the Constitution in 1791. He then returned to the state senate during the 1793 session. He only served one year before resigning due to his failing health.

John Dickinson died at Wilmington, Delaware on February 14, 1808. He was buried in the Friends burial ground.