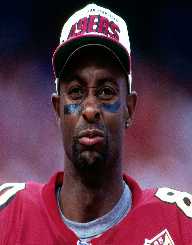 Jerry Lee Rice was born on October 13, 1962, in Starkville, Mississippi. He grew up in a small town, Crawford. Rice’s father was a brick mason. Rice attended the B. L. Moor High School. During his freshman year, his mother did not allow him to join the football team. In his sophomore year, Rice was caught cutting class, when the principal of the school caught him. Rice tried to run away, and his incredible speed was noted. The principal then told the football coach about his speed and Rice was offered a place on the team. After this, Rice joined the football and basketball team, as well as the track and field team.

After high school, Rice enrolled at Mississippi Valley State University. He played his first season in 1982, catching 66 passes for 1,133 yards. The following year, he increased his stats and was named first-team Division I-AA All-America. Rice’s senior year came with a record-breaking personal score of 112 receptions and 1,845 receiving yards and 27 touchdowns. During the 1984 season, The Delta Devils scored 628 points on average more than 59 points per game, which caught the national attention. That year, Rice was named to every All-American team.

After his record-breaking 1984 season, Rice had caught the attention of several NFL scouts. However, his speed was worrying most of them. Rice was selected as the 16th overall pick for San Francisco 49ers. He began his rookie season slowly, but picked up his score, recording 49 catches for 927 yards, and was named the NFL Offensive Rookie of the Year. During the 1986 season, Rice caught 86 passes for 1,570 years, leading the league with his score. The following year, Rice was named NFL’s Most Valuable Player and the Offensive Players of the Year.

In 1988, Rice reached the highest score in his career with 20.4 yards per catch and nine touchdowns. San Francisco 49ers won the NFC West title with 10-6 record. At the Super Bowl XXII, Rice showed one of the best performances ever, catching 11 passes for 215 yards and a touchdown. His performance secured 49ers the Super Bowl win and the MVP title. In the 1989 season, Rice once again helped the 49ers to advance to the Super Bowl and win the game, scoring seven catches for 148 yards and three touchdown receptions.

The 1997 season was not going well for Rice. At the beginning of the season, Rice roe his anterior cruciate and medial collateral ligaments in his left knee. This injury meant that Rice had to break his 189-consecutive game streak. He made his return 14 weeks later but cracked his left kneecap while scoring a touchdown.

Due to a team rebuilding, Rice left the San Francisco 49ers and signed with Oakland Raiders after the end of 2000 season. He formed a receiver duo with Tim Brown, which was a success. During his first season with the Raiders, Rice caught 83 passes for 1,129 yards and nine touchdowns. The Raiders made an appearance in Super Bowl XXXVII but lost. With this game, Rice became the first player in the history of NFL to catch a touchdown pass in four Super Bowls. In 2002, Rice scored his 200th career touchdown and became NFL’s all-time leader in total yardage. However, during this season the team was not doing as well, and Rice requested a trade.

During the 2004 season, Rice was traded to the Seattle Seahawks. He set a new NFL record for combined net yards, by catching a 27-yard touchdown pass. The 2004 season was Rice’s 20th season in the NFL. He was opted to join Denver Broncos but decided to retire. In 2006, 49ers signed a contract with Rice, so that he could retire from the team he started and spent the most of his career with. 49ers signed a one day contract with Rice for $ 1,985,806, 49, representing his birth year, his number, the year he retired and the 49ers. Rice received no money since the figure was ceremonial.

Rica was inducted into the Pro Football Hall of Fame in 2010, and his jersey No. 80 was retired. Rice made several media appearances, like for Visa, All Sport and Gatorade commercials. In 2005, Rice participated in the reality TV show Dancing with the Stars. He has also co-authored two books about his life- Go Long: My Journey Beyond the Game and the Fame (2007) and Rice (1996).

In 1987, Rice married Jacqueline Bernice Mitchell, but the couple divorced in 2007. They had three children together. Rice has also been an avid golf player for more than 20 years. During his football career, he used to wake up early in the morning to play. In 2010, he completed the Fresh Express Classic on the Nationwide Tour but missed the cut for the tournament.