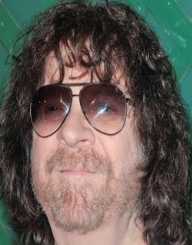 At the age of 71 years, Jeff Lynne is one of the oldest touring rock and roll musicians in the world.

Jeff Lynne was born Jeffrey Lynne on the 30th December 1947 in Birmingham in Central England. He was raised by his parents Phillip and Nancy Lynne. Jeff Lynne was lucky to have both parents working in the middle income earning neighborhood. He went to school in a local primary school. He then proceeded to Alderlea Secondary School. This was a strict boy’s only school.

Since childhood, Jeff Lynne was surrounded by music. He was entertained by his grandfather on the instruments and the grandmother on the vocals. His parents exposed him to the music world. Many times, his father took him for musical concerts by visiting artists. This helped build his urge to pursue music.

The media played a significant role in his childhood passion. He heard some of earliest favorite hits from the radio. In 1961, he listened to the song ’Only the Lonely’ for the first time. The song by Roy Orbison captivated his mind for some time. After some few more listening to the Beatles songs, Lynne prevailed on his father to buy him a guitar. His father obliged, and Lynne got his guitar when he was still a high school student.

Driven by obsessive passion, Jeff Lynne dropped his studies to pursue music. This infuriated his mother who thought her son was better as a journalist. At fifteen years of age, Lynne founded his first band.

The trio comprised of his close friends Robert Reader and David Walsh. They went by the name Rockin’ Hellcats. They went on to change the name twice. They changed it to Handicap; then after gaining some popularity, they called themselves Andicap. The trio started their gig at the local community center hall in Sharp End.

They made their base at Regal Cinema hall. They entertained revelers during the film interludes. Within a short period, the trio was playing on invitation all over Birmingham. In spite of their rising fame, Reader and Walsh moved out of the group in 1964.

Jeff Lynne soldiered on with the band bringing in other members on board. Surprisingly, Lynne also left the band he initiated in the same 1964. He joined a more vibrant local band called The Chads. The following Year Lynne was already geared to move on.

Jeff Lynne moved on to another local band The Nightriders. His talent was noticed, and he was soon the bands leading guitarist and premier songwriter. In 1968, at the age of 20, Lynne helped his band release its first album.

The group had also changed its name to The Idle Race. The album titled The Birthday was an instant hit locally. The Idle Race became a rising force on the British musical scene. In 1969, Lynne and his group released yet another album.

Contrary to their expectations, the album never found its way up the musical billboards in Britain. Frustrated, Lynne left the group in 1970. In a while, he had joined another band and moved again.

This time Jeff Lynne settled on a new band The Electric Light Orchestra, popularly known as ELO. Lynne made immense strides with his new band. For the next ten years, he contributed to the writing and production of their songs. ELO produced an album each in 1971 and 1972. It was in 1973 that Lynne got his much-prized desire. The second album of ELO titled ELO 2 broke into the British billboard charts.

In 1974, Lynne and ELO released their fifth album Eldorado in the US. The album was widely viewed as a retort to the open criticism by his father. Eldorado went viral in the US and UK. Lynne produced more than forty albums with ELO. He is still a producing musician.

Jeff Lynne has been married twice. His first union was with Rosemary Adams. They were married from 1972 to 1977. He then married two years later in 1979. His second wife was Sandi Kapelson. With her, Lynne had two daughters. Eventually, the couple divorced.

As a young boy, Jeff Lynne dreamed of becoming a star. He moved from band to band in search of a breakthrough. Today, he is Britain’s oldest and most famous Rock N roll star.

Jeff Lynne was the recipient of several awards. In 2014, Birmingham honored its famous son with a star on its Walk of Fame. The following year, he was an inductee on Hollywood’s Walk of Fame. Two years later, Jeff Lynne became a Rock N Roll Hall of Fame member.