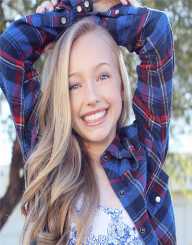 Jayce Wilkins is an American dancer. Jayce was born on November 24, 2002, in the state of Arizona, Unites States of America. Jayce started dancing at an early age and has received several awards such as Best Female Mini-dancer in 2013. The young Jayce Wilkins has an immense support base in the social media. On Instagram, Jayce has a following of more than 300,000 fans.

Jayce Wilkins's' is so passionate about dancing that nothing can stop her from doing it. Jayce has suffered from Perthes Disease but remains hopeful that she will get back to dancing. The only fit description for is a "Dancing Guru."Jayce's unique moves outmatch her age.

Jayce Wilkins was born in Queen Creek, Arizona on November 24, 2002. Her mother is called Kelli while the father is Kevin Wilkins. Jayce has one elder brother named Ryland. Jayce Wilkins is passionate about dancing.Jayce developed the interest at a young age. When she was two years, Jayce Wilkins started dancing officially.Jayce began competing professionally, and when she was nine years, Jayce won the Junior Miss Dance in 2012.Jayce's relatives continued to support her, and she competed in many other dancing events.

A challenge cropped up when Jayce Wilkins suffered from Perthes Disease; the disease weighed her down and rendered her unable to walk.Jayce has vowed to remain positive through the problem and rise even higher after she gets well.

Jayce Wilkins's dancing career is almost as old as she is. Jayce started dancing when she was only two years old. When her mother realized how talented Jayce was, she enrolled Jayce at her dancing club called the Club Dance Studio. Jayce's flexibility was unmatched, and it came in handy in her dancing career. After a short time, Jayce Wilkins became the queen of the studio by her incredible moves and shakes. Jayce Wilkins's star rose rapidly, and she started competing in dancing competitions. Jayce did very well and in 2011 was a star in the dancing industry. Jayce won her first accolade the same year when she finished second for Miss Petite KAR. Jayce was also runners-up in Primary Duo/Trio 8 and Under KAR.

Jayce Wilkins started making appearances on the television when she appeared in Disney Channel's dancing competition "Shake It Up. Wilkins also appeared on NBC's "America's Got Talent." Jayce continued to do well in dancing.Jayce, together with her friend, Dylynn Jones, appeared once again in the Disney's "Make Your Mark." They outshined the other participants in the competition, and this offered the yet another opportunity in a scene of "Shake It Up." They participated in the scene together with Zendaya Coleman and Bella Thorne. In 2012, Jayce Wilkins won Junior Miss Dance. Jayce also took part in the SMILE event and bagged Secondary Solo 8, Under KAR and Mini Solo (Jump).

In the same year, Jayce Wilkins was selected the Kid of the Month by "These Kids have Talent." As a result, Jayce was chosen to join Fresh Faces Dance Group which offered her the opportunity to train with the best including teachers of dancing. In 2013, Jayce Wilkins was awarded the Dance Awards among the "Top Ten Best Female Mini Dancers." Jayce Wilkins's career was cut short after she suffered from Perthes Disease. Jayce has however remained optimistic that she will get back to dancing and live her passion.

Jayce Wilkins has won several awards in her short stint in dancing. The awards include;

• On October 2012, Jayce Wilkins was voted Kid of the Month "These Kids Have Talent."

Jayce Wilkins was born in Arizona. The surrounding environment encouraged Jayce to pursue her dancing career. Her mother owned a dancing studio. This helped Jayce practice and eventually perfected her moves. Jayce Wilkins suffered from Perthes Disease. She is on crutches and has problems walking.Jayce has however vowed to keep the fire burning. She has also been quoted saying that she will never take things for granted after she gets well.

The doctor required that Jayce Wilkins must have two surgical procedures and wear an external fixator and a brace for approximately six months. She has been bound to crutches and wheelchair. Jayce Wilkins's Facebook, Twitter and Instagram accounts have been busy with fans wishing her well. Jayce has an extensive support base on Instagram of more than three hundred thousand fans.