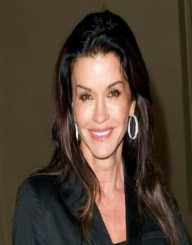 Janice Dickinson is an American Model who models on the runway, advertising, and print. She is also a spokesmodel and a muse to several big names such as Valentino and Alaia among others. When she started her career she was rejected by almost everyone in America due to her ethnicity, but she did not give up on her dream, and now she is a famous and fashionable model. She made her name in France where her looks were admired by many.

Janice Dickinson later came back to the United States and became a very famous model whose name was the number one choice for brand names such as Vogue, Elle, and Revlon among others. She is a party girl and connected to stars such as Bruce Willis and Sylvester Stallone among other big names in Hollywood. She has also appeared in televisions shows such as ‘Top Models’ and ‘The Surreal’ among other shows. She is also a renowned author who has written a lot on her fashion ventures.

Janice Dickinson was born on February 15, 1955, in Brooklyn, New York. She was born to Jennie Marie and Ray Dickinson. She has two siblings, Alexis who is a real estate agent and Debbie who is a model. When she was a child and teenager, she suffered physical and emotional torture from her father. She talks about how her father used to abuse them physically and also sexually abuse one of her sisters. She did not consent to have sex with her father, so her father used to harm her and beat her up. He usually abused her by saying that he looked like a boy among some other nasty stuff.

In the 1970s Janice Dickinson moved to New York to get away from her father and also pursue a career in modelling. She actively wanted to pursue a career in modelling after she won the national competition ‘Miss High Fashion Model.’ She had a hard time getting a modelling gig in New York as only beautiful and blonde ladies were chose as models. She was turned down by many people because they claimed that her ethnic looks were not for modelling in America. She was discovered by fashion photographer Jacques Silberstein after his girlfriend and actress Lorraine Bracco fell in love with her looks. Wilhelmina became her first modeling agent and then she decided to move to Paris where her looks would be considered for modelling.

In 1978, Janice Dickinson returned to the United States and started working as a model in New York where she earned a steady salary of $2000 every day. She was later signed with Ford Models to model for an ad campaign. The ad campaign was for their newly launched JVC Camera. She was among the twenty Ford models to join up John Casablanca’s Elite Model Management. In the 1980s, people started recognizing Janice as she was regarded as a supermodel. She has the type of body and face that would pass in the modelling industry.

Janice Dickinson, therefore, started in the cover pages of magazines such as Vogue, Playboy, Elegance, and Cosmopolitan among so many other magazines. She appeared as a cover model for the Vogue thirty seven times and seven times for Elle Magazine. She started modelling for big names in the fashion industry such as Calvin Klein, Pino Lancetti, Bill Blass and Oscar De La Renta’ among others. She was also the model for products such as Revlon, Cutex, Orbit Gum, Hush Puppies and Virginia Slims among other products. In 2003, she appeared on the American reality television show ‘America’s Top Model’ as a judge on the show.

In 2005, Janice Dickinson appeared on ‘The Surreal Life’ as one of the cast members in season five. A year later she appeared in yet another reality television show which was her own ‘The Janice Dickinson Modelling Agency’. The show established her as a modelling agent. In 2007, she appeared in the English show ‘Abbey and Janice: Beauty and the Beat’ alongside model Abigail Clancy. In the same year she participated in the show ‘I’m a Celebrity......Get Me Out of Here’. In 2010, she appeared on the reality show ‘Come Dine with Me’. In the same year she appeared in another reality show ‘Celebrity Rehab With Dr. Drew’.

Janice Dickinson has been married three times to Ron Levy, Simon Fields, and Albert Gertson. In 2012 she got engaged to psychiatrist Dr. Robert Gerner to whom she got married to in 2016. She has two children, a son called Nathan Ray Michael Fields from Simon Fields and a daughter named Savannah Rodin Dickinson from her boyfriend, Michael Birnbaum. She has revealed in her books that she had many lovers including Frank Zappa, Bruce Willis, Sylvester Stallone, Grace Jones and Jon Lovitz among so many other people. She has had relationships with both men and women.