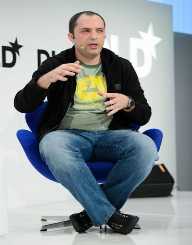 In this heightened technology, we are all familiar with brainstorm applications that have retailed the online market tremendously. With a stable network, you are destined to send countless of videos and messages across the globe. However, there is one app that seems to surpass other providers. You know the one that provides you with an end to end encryption, group chats and blocking option. It is none other than WhatsApp messenger that was launched in 2009. An Internet Entrepreneur, Jan Koum is the co-founder of the said mobile messaging application. In partnership with Brian Acton, the two gave birth to the most compelling online instant messenger. As a duo, they opted to sell the app to Facebook Inc. in 2014.To date, Jan is defined as the most profound and famous billionaire internationally. In all, Koum had a decent life but he strived for the best and focus was his in-thing. Jan is the real definition of rags to riches. Read on.

Before attaining his end goal as an internet entrepreneur, Jan Koum lived an impoverished life. Jan's life was as blurry as the morning dew, but he didn’t fail to adjust his focus. Sharp like a flying eagle, he knew that he had to narrow his focal point and set out to spot the prey was his end aim. He came from a humble and decent family in Ukraine where they later moved to the U.S. Before settling down Jan struggled to make ends meet for his family.

He stayed with his loving mother and grandmother. Hell broke loose when his mother died due to cancer. Regardless of what he went through, he never missed his end target. It was through his toil that he served at Yahoo as an engineer. All this time he attended a local college without sponsorship. It was in the same company that Jan met Brian Acton with whom they planned to have a long-term partnership. After working for some time, the two left in search of greener pastures. Their love for social media gave them a chance to launch their famed application.

On February 24th, 1976 Jan Koum was first seen in the world in Kiev, Ukraine. He is the only child who was born to Jewish parents. Since inception, Jan embraced a simple life that was briefly affected by political regimes. The family opted to flee to their native home where they went to settle in the United States. It was in 1992 that Jan started to live in the US along with his mother and grandfather. His father had planned to join them later where he went to search for greener pastures. Sad to say, he fell ill and breathed his last in 1997.

During the immigration scenes, Jan teenage life was affected where he didn’t adjust to living in a neighboring country. Nevertheless, life had to continue whether he liked it or not. His mother started to work as a babysitter for her family’s upkeep. On the other hand, he began to work as a cleaner at a local store.

Afterward, he saved a little where he managed to join high school. It was there that he fell in love with programming. He completed his high school studied at the age of eighteen where he learned computer networking, all thanks to online tutorials. He later joined the San Jose State University.

For his upkeep, Jan Koum was assigned a job at Yahoo where he inspected security levels. It was there that he met Brian Acton who worked at the said company. With hard work and zeal, Jan was summoned to work as an infrastructure engineer at Yahoo.

For nine years Acton and Jan worked at Yahoo, but they also had their plans. Their end aim was to grow with other internet entrepreneurs. Sadly Yahoo didn’t give them a chance to explore their area of interests. In that tone, but resigned in 2007.

As a duo, the ally’s went to South America. After a year they came back where they tried to apply for jobs at Twitter and Facebook without success. In 2009 Jan purchased a new iPhone. He took the time to visit the Application stores where he noted the market competition of several applications. This is what gave him an idea to come up with a new mobile application.

With an indelible soul, Jan linked with Acton, and the two founded WhatsApp Inc. on Koum’s birthday. One of their firm promises was that their company would never come to connect with other advertising agents. It was in 2010 that the two launched the

However, the app started to fail in between the trials, but Acton advised Jan to be patient. Eventually, WhatsApp turned out to be the most enjoyed messaging application around the globe. Though they lacked capital, in the beginning, success became their next of kin.

By 2013 WhatsApp had over 250 million users. It was here that Facebook opted to buy the app from Jan and Acton. He managed to sell his worthwhile investment for $19 billion in 2014. Before the end of 2016, WhatsApp became the talk of the town for the young and old.

Jan and Brian were awarded an Annual Crunchies Awards recognition in 2015. When it comes to his own life, Jan was once accused of threatening his ex-girlfriend in 1996. However; sources say that he regretted his ill-behaved personality.