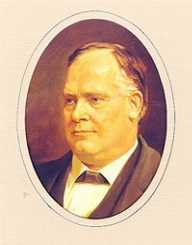 James S. Sherman was an American politician born on October 24th, 1855. He was the 27th Vice President of the U.S.A. He was also a member of Republican Party in most of his political career. He began his career practicing law before shifting his focus to politics. In his early career, he diversified his law skills by working in various firms. This gave him much experience that later came in handy during his political career. He was only 29 when he became Utica’s mayor. He was initially a Democrat supporter but later shifted to the Republican Party.

James S. Sherman was born on October 24th, 1855. His place of birth was in Utica situated in New York. His father Richard Sherman worked for a Democratic newspaper as a publisher. He also had a business of food canning.

James S. Sherman began his early education at Whitestone Seminary. By 1874, he was through with his studies at the school. He then joined Hamilton College. During this time at the institution, he became a member of the debating club. He proved to be a great debater and public speaker. As soon as he graduated from his studies, James S. Sherman got a job at Cookingham & Martin. This was a law firm.

In his early career, James S. Sherman worked for some organizations. Among these organizations was Utica Trust & Deposit Co. Where he was appointed as the president. He became Utica’s mayor at the age of 29. He was a great supporter of the Republican Party during this time.

He became 23rd congressional district’s representative of U.S in 1886. He was re-elected to the position later in 1890. During this time in his political career, he was a member of many committees. He was a member of Industrial Arts, Foreign Commerce, and the Judiciary among others.

He was appointed as the Republican State convention’s chairman in 1895. He maintained this position in the second and third elections consecutively. The third time was in 1908. During this time, he tried his luck for the post of speaker in 1900. Unfortunately his opponent David Henderson got the chair.

During his time in power, James S. Sherman ruled fairly.  He was applauded for his dignity and calm disposition. What was even lovelier about him was his sense of humor. In the later elections for the chairman of the state convention, he lost to Roosevelt.

He joined efforts with Taft during the campaigns for the 1912 Presidential elections. Their greatest opposition came from Bull Moose Party led by Roosevelt. Unfortunately, Sherman’s health began failing during this time. He passed on just before the elections were done.

James S. Sherman tied the knot with Carrie Babcock in 1881. She was from New Jersey. Together they had three sons.

James S. Sherman took his last breath on October 30th, 1912 in New York.  He had suffered kidney problems in his later years. He was 57 years old at the time of his death.