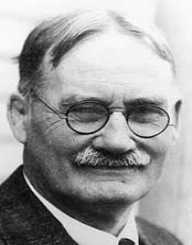 James Naismith was born on November 6, 1861, in Almonte, Ontario, Canada. His parents were immigrants from Scottland. He was orphaned in early childhood and lived with his aunt and uncle. Naismith was not talented in school but was gifted in farm work. He attended grade school near Almonte and later enrolled in Almonte High School, graduating in 1883.

As a child, James Naismith often played catch, hide-and-seek, and the medieval game duck on a rock. After graduating high school, Naismith enrolled at the McGill University in Montreal. He was a talented athlete and played football, lacrosse, rugby, soccer as well as participated in gymnastics. In 1888, Naismith earned BA in Physical Education and a diploma from the Presbyterian College in Montreal. After graduating, he began working as a physical education teacher at the YMCA International Training School in Springfield, Massachusetts.

James Naismith was struggling with his classes at Springfield YMCA. Due to the harsh New England winter conditions, he had to lead his classes indoors. He became short-tempered, but the head of Physical Education, Dr. Luther Gulick assigned him a task to create an indoor game as an athletic distraction. He was given an assignment to invent a game that would be relatively safe but would keep the athletes in good physical shape.

Three main thoughts guided Naismith- he analyzed the favorite games at the time and concluded that soft soccer ball was the safest option. He also noted that most injuries occurred while dribbling and running with the ball, therefore making the passing of the ball the only legal option. He also reduced body contact by making the goal unguardable- placing high above player’s heads. He created 13 basic rules and named his game Basket Ball.

The first Basket Ball game was played in December 1891. At the time, the game was played in teams of 9 people, and soft soccer ball was used. In the following year, the game became very popular on the campus. Dennis Horkenbach of the Springfield college newspaper wrote an article “A New Game.” The game was introduced internationally by the YMCA movement. Naismith himself went to Denver and acquired a medical degree. In 1898 he joined the University of Kansas.

When James Naismith arrived at the University of Kansas in 1898, he started the men’s basketball team. At first, he was not the basketball coach, but a chapel director and physical education instructor. By 1900, there were already enough basketball teams in the East, and the first intercollegiate competitions were played out. Basketball was the demonstration sport at 1904 Summer Olympics in St. Louis. Naismith himself was not interested in self-promotion but focused more on his career in physical education.

Naismith received an honorary PE Masters degree in 1910. In 1916, he traveled to France and published two books. In 1935, the National Association of Basketball Coaches collected money so that Naismith could attend the 1936 Summer Olympic Games and witness basketball’s introduction as the official Olympic sport. During the games, he was named the honorary president of the International Basketball Federation. Naismith retired from Kansas in 1937. He died two years later after suffering a fatal brain hemorrhage.

James Naismith married Maude Evelyn Sherman in 1894. The couple had five children. Naismith was also a Presbyterian minister and a Freemason. When his wife Maude died in 1937, he remarried two years later to Florence B. Kincaid. The same year, he suffered from a major brain hemorrhage and died nine days later at his home in Kansas.