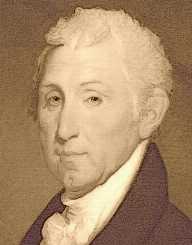 James Monroe was the fifth President of the United States of America. Born on April 28, 1758, he fought in the Revolutionary War and became the last in the line of the Founding Fathers of the United States and the Virginian dynasty to be president. Monroe was the one who ended the dominance of the Republicans in that office as he was a Democrat. Before assuming the oval office, he served in the House of Delegates and the Congress of the Confederation for Virginia.

James Monroe later served under President James Madison as a Secretary of State and a Secretary of War and had previously served as a diplomat in France. The capital of the West African country, Liberia, Monrovia was named in his honour for his support of the colonies in Africa for free slaves that later formed the country Liberia.

James Monroe was born in Westmoreland County, Virginia to Spence Monroe and Elizabeth Jones. His father was a planter and carpenter. Monroe was homeschooled and tutored by his mother up to age 11 and later studied at the Campbelltown Academy. He was outstanding in academics and was ahead of his age groups in the study of mathematics and Latin. After the death of his father in 1774, he inherited the plantation and slaves and became a member of the ruling class of planter-slaveholders in Virginia.

At age 16 James Monroe enrolled at the College of William and Mary but later dropped out to join the 3rd Virginia Regiment of the Continental Army. He immediately rose to become an officer’s commission due to his educational background and as a son of an influential planter. Fighting in the Battle of Trenton, Monroe was severely wounded in the left shoulder by a musket ball and was saved from bleeding to death by doctor John Riker. The soldiers had come across Riker when marching through Nor’easter to Trenton.

In 1779, James Monroe returned to Williamsburg to study under George Wythe in law and a year on studied under Thomas Jefferson in Richmond. His studies were interrupted when the British invaded Richmond and Jefferson who was then Governor appointed him as colonel to raise an army for the war. He continued his studies in 1783 and practised law in Fredericksburg, Virginia after passing the bar.

Throughout his life, James Monroe had always thought of being powerful and influential in the society. To achieve his goals, he sold the plantation his father left him to venture into politic. His political career started with his election to the Virginia House of Delegates in 1782 where he served on the Virginia Executive Council. After his term of office ended, he was elected in November 1783 to the Congress of the Confederation where he served in Annapolis until 1784.

After his third term of office elapsed, James Monroe retired due to the rotational policy at the time. Two years later, he was elected back to the Virginia House of Delegates and the Virginia Constitutional convention as a delegate in 1788. During his term, he advocated for the western imperialism and supported close ties with France.

To be appointed as a diplomat to France under President Washington’s administration, James Monroe resigned as a Senator in 1794. Being a strong supporter of close ties with France, Washington believed his appointment would deepen the US and France ties. Despite the Jay Treaty between France and Britain who were at war at the time, he gained support from France for the US to navigate on the Mississippi River which was under the control of Spain. Both countries, then signed the Pinckney Treaty to give US limited rights on to use the New Orleans port.

James Monroe also negotiated for the release of Americans held in French prisons. However, he was not able to convince the French to expunge the Jay Treaty with Britain, hence; he was recalled to the US in November 1796. He practised law after his return and later served as a Governor of Virginia for two terms from 1799 to 1802 and reelected in 1811. From 1803 to 1807 he served as a Minister to the Court of St James.

James Monroe became the Secretary of State in 1811 under Madison administration and during his administration pressed for a war against Britain to avert their impressment of US sailors. The war declared on June 1812 went wrong for the US as the British burned the White House and their capital. He was later appointed the secretary of war on September 27, 1814. He resigned from the position on March 15, 1815.

James Monroe with no substantial opposition force to contend him won the 1816 Presidential elections and continued with a second term in 1820 elections on the ticket of the Democrat-Republican Party. He was the second after Jefferson to serve two terms as President at the time. During his term of office, he watered down political tension that was prevailing in the country. He toured the country to build national trust and oneness. His tour to Boston in 1917 coined the term the “Era of Good Feelings.”

James Monroe also embarked on several infrastructural developments in the transportation sector and others to ensure economic growth. Despite his measure to provide a robust financial background for the country, it was faced with what came to be the Panic of 1819. It was the first major depression since the 1780s. Export and imports declined as well as a drop in agricultural prices resulted in high unemployment and bankruptcy.

During James Monroe's term in office, the Rush-Bagot Treaty was signed with Great Britain on April 20, 1817. This treaty regulated naval weaponry on the Great Lakes and Lake Champlain and also removed military installations on the US and British North America borders. Other treaties like the Treaty of 1818 with Great Britain and the Russo-American Treaty of 1824 with Russia among others were reached.

James Monroe married Elizabeth Kortright on February 16, 1786. The couple met when Monroe was serving in the Continental Congress. The couple was blessed with three children, Eliza Kortright Monroe, James Spence Monroe and Maria Hester Monroe. Elizabeth Kortright died in 1830. After Monroe's term of office as a president ended on March 4, 1825, he became financially distressed and had to sell his Highland Plantation. This situation is attributed to his wife’s ill health. Monroe died of heart failure and tuberculosis on July 4, 1931, shortly after the death of his wife.

James Monroe received several honours including the naming of the capital city of Liberia, Monrovia in 1824. The United States Postal Service released a 5¢ Liberty Issue postage stamp bearing his image on December 12, 1954. Several academic buildings in institutions like the University of Mary Washington, George Washington University, and George Mason University as well as cities like the Monroe, Michigan and Monroe, Georgia among others have been named after him

James Monroe was the last US president who never got photographed and also the last to wear a powdered wig tied in a queue, knee-breeches and a tricorne hat while in office. He is the third president to have died on the independence day of America.