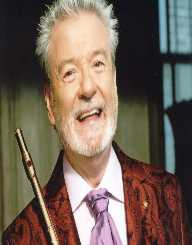 James Galway is a prominent Irish flute player, known by the nickname “The Man with the Golden Flute.”

James Galway was born in the city of Belfast, Northern Ireland, on December 8, 1939. His entire family was involved with music, although not professionally. His father played the flute and worked at a shipyard. His mother played the piano and worked in a flax mill.

James Galway experimented with different instruments during his childhood, including the violin and the harmonica. He ultimately decided for the flute, learning the basics from his uncle. When he was nine years old, he joined the Fife and Drum Corps musical ensemble. Two years later, he entered the Belfast Flute Championships, and he won the junior, senior, and open levels. At the age of fourteen, he left school, and he spent the following two years working as an apprentice to a piano repairman.

James Galway enrolled at the Royal College of Music London where he was taught by John Francis. He continued at the Guildhall School of Music and Drama where he studied under the flute player Geoffrey Gilbert. After that, he moved to Paris, France. He attended the Conservatoire de Paris. He was mentored by the flute players Gaston Crunelle, Jean-Pierre Rampal, and Marcel Moyse.

After graduation, James Galway started performing in different orchestras in London. They included the Royal Philharmonic Orchestra, Covent Garden Opera, Sadler’s Wells Opera, and the London Symphony Orchestra. In 1969, he got the position of the leading flute player in the Berlin Philharmonic Orchestra. He stayed there for six years, until 1975. After that, he decided to pursue a solo career.

As a solo flute player, Galway started performing in many different musical events. In 1976, he released his first album called The Man with the Golden Flute, which would later become his nickname. He released dozens of albums over the years, the most famous one being 60 Years, 60 Flute Masterpieces. Overall, he has sold over 30 million records.

James Galway has performed many classical pieces from legendary composers such as Wolfgang Amadeus Mozart and Antonio Vivaldi. He has also worked on new music, created by composers like David Amram, William Bolcom, and Joaquin Rodrigo. He has collaborated with various musicians, such as Elton John, Andrea Bocelli, the traditional Irish band The Chieftains, and others. He has covered famous modern songs, such as “My Heart Will Go On” by Celine Dion and “I Will Always Love You” by Whitney Houston. He also contributed to the soundtrack for Peter Jackson’s film The Lord of the Rings.

James Galway has received numerous awards for his outstanding contribution to instrumental music. In 1977, he got the title of Officer of the Order of the British Empire. In 2001, he was knighted by Queen Elizabeth II. In 2014, he received the Gramophone Lifetime Achievement Award, the most prestigious classical music award in the world.

James Galway is the president of the global charity organization Flutewise, which supports young flute players from around the world. He is an ambassador of the National Foundation for Youth Music in the UK. He is a patron of the music fraternity Delta Omicron. In 2013, he created First Flute, a series of online classes for flute. Apart from music, he is also a patron of the Nystagmus Network in the UK. It is a support group for people who suffer from nystagmus, an illness that causes involuntary movements of the eye, preventing proper vision. He suffers from the condition himself.

James Galway had a son with his first wife, a woman he met in France. After that, he married Anna Renggli, a daughter of a prominent Swiss architect. He moved to her hometown of Lucerne, and they had a son and twin daughters. In 1984, he married the American flute player, Jeanne Cinante. They live in the Swiss village of Meggen, and they often tour together.