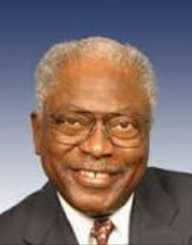 James Clyburn is an American civil rights activist and politician who served as a US Representative at the Sixth Congressional District of South Carolina.

Born in Sumter, South Carolina on July 21, 1940, as James  Enos“Jim” Clyburn, he grew up in a household that was made up of politically active parents. His father, Enos Clyburn, worked as fundamentalist minister while his mother Almeta found employment as a beautician. The man behind the organization of the Colored Farmers Alliance (CFA), George W. Murray, was a distant relative of Clyburn and also served as South Carolina’s Republican Congressman in the 53rd and 54th US Congress.

Growing up, the young James Clyburn inherited his parents’ passion and activism towards politics hence him being elected at the young age of 12 as the NAACP's president.

James Clyburn entered the world of politics in 1970 where a failed attempt to run at the South Carolina General Assembly gave him the exposure to set his political career. Shortly after his unsuccessful feat, he was called in to work as an advisor to John Carl who was serving as South Carolina’s governor at the time. He worked his way up as Commissioner at the Human Affairs Department in South Carolina, a status that he held on for 18 years before running for a seat in the House of Representatives.

He managed to win a seat at the House of Representatives in 1992 and is considered as the first African American to serve as a delegate of South Carolina in the US Congress since 1897.

He was also appointed as Chairman of the Congressional Black Caucus in 1999 and was elected as Vice Chair at the House Democratic Caucus in 2002.

Prior to his political career, James Clyburn first found employment as a full-time professor in Charleston’s C.A. Brown High School and also worked at youth programs as director and employment counselor.

Over the years, he has expressed his belief especially in regards to environmental concerns and varying degrees of discriminatory issues that are still apparent today, as well as health care and an increase for the funding of higher education.

At the tragic event of the Charleston Church Shooting that took place on June 15, 2017, James Clyburn spoke up at the vigil mass held shortly after the tragedy, inspiring hope not only to the victims’ families but also to the people.