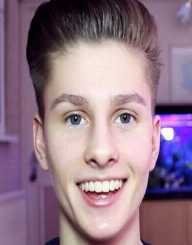 Jake Mitchell was born on January 12, 2000, in Hereford, England, United Kingdom. He was born to Rob Mitchell who is also a YouTube star, and he has his channel called ‘RJMLANDSCAPES.’ Jake is a British YouTube star and vlogger. He is seventeen years old. He has a young sister by the name Eloise who is two years younger than him. He attended Bishop of Hereford’s Bluecoat School. He has more than two hundred and twenty thousand followers on Twitter, more than four hundred thousand followers on Instagram and more than one million followers on YouTube. He has a YouTube Channel known as ‘Jake Mitchell.’

Jake Mitchell started making videos when he was only eight years old. At first, he made videos for fun but it, later on, became his thing. He uploaded his first video in 2011 on his father’s YouTube channel which was viewed by a lot of people and received positive remarks. He adds music and sound effects to his videos to give them a sense of stories. He used his father’s computer to edit photos and make stories with them then upload them online. At eleven he started making short films with the help of his father and his schoolmates.

Jake Mitchell developed a love for making videos, and he was so determined to have a career as a filmmaker. The videos he created he uploaded on his father’s channel where they received great success. He was so happy about what he had done for himself. He was not confident that his videos would receive positive outcomes and that he would achieve success at a young age. In 2013, he created the YouTube Channel known as ‘Jake Mitchell’ where he started uploading his videos and the films that he made.

In 2014, Jake Mitchell created a video where he interviewed Casper Lee. A year later he uploaded the video titled ‘Annoying Things Parents Do’ which was received well and it went viral within a short period. This video made him famous among the youths, and he also became so popular as a young filmmaker. The video was viewed by more than six hundred and fifty thousand people across the world. He has not stopped making films and videos as he believes that he has found his career path. He earns thousands of pounds because of the videos that he makes.

Jake Mitchell started his career at a very young age, that is, eight years old. He received and continued to receive a lot of support from his father.  He started making videos while he was still in school and his videos became famous among his peers. His fellow schoolmates love his videos because they are comical. Jake is a cheeky person, and he used to make jokes in class that would bring all his colleagues to laughter. He made videos of him imitating his school teachers who were filled with humor.

When his videos became popular to the youth, they started referring to him as Justin Bieber because they look alike. His number of followers grows every day because he chooses to express the activities that happen in people’s daily lives humorously and comically. Jake Mitchell has made a name for himself as a social media personality at his young age, and he is going far because he is optimistic about having a great career ahead of him.

Jake has stayed away from controversies since he began his career. Some stars have appeared in his videos since he started uploading them. These stars include ‘Jake Boys’, Sam King and Casper Lee among others. His sister and some of his schoolmates have also appeared in some of his videos. He is a lively and social person.

Jake Mitchell is dating YouTube Star, Saffron Barker since 2015. He has given him and his girlfriend the name #Jaffron for the efforts that they combine when working together. He loves travelling, and he hopes that he would be able to travel to different corners of the world. He also enjoys chatting with his fans face to face.