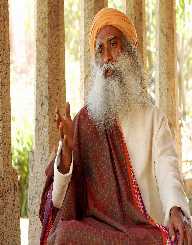 Jaggi Vasudev was born on September 3, 1957, in Mysore, Karnataka. His parents were Susheela and Dr. Vasudev. He also has three siblings.

When Jaggi Vasudev was a child, the Vasudev family moved around often as Jaggi’s father worked with the railroad systems. Jaggi didn’t mind having to move around often, though. He was a curious child, always taking in the new scenery.

When Jaggi Vasudev was a child, he met Malladihalli Sri Raghavendra Swamiji, a yoga teacher. The two became fast friends. Even though he was a child, Jaggi still loved to learn new yoga poses. He practiced yoga every day, even after he was no longer in contact with his teacher.

Since his family moved around a lot, Jaggi Vasudev did not have a stable education as a child. However, once he was a young adult, he attended the University of Mysore. Here, he studying English Literature. He graduated from the school with a bachelor’s degree.

Fresh out of university, Jaggi Vasudev began his career not in English literature, but instead as working as a businessman. During the first couple of years in his new career, he opened up several businesses, some of his most famous being a chicken farm and a construction business.

In 1983, Jaggi Vasudev began teaching yoga classes in Mysore. At first, he had less than a dozen students at a time. He was kind enough not to charge for his classes. He could get away with his because he still had some saving from his previous businesses. He later began traveling, taking his yoga classes on the road. He did this throughout the 1980’s and into the early part of the 1990’s.

In 1992, Jaggi Vasudev started his yoga studio called the Isha Foundation. Yoga was one of the main programs here, but he also offered other spiritual programs. As time went on, throughout the 1990’s, the foundation expanded. It later had programs in countries all over the world, including in continents like North America, Europe, and Asia.

Throughout the 2000’s, the Isha Foundation began to expand. It began making several new programs including the Action for Rural Rejuvenation, Project Green Hands, and Isha Vidhya. These projects were made to improve the lives of poor people and to improve the environment by planting more trees and cleaning up garbage. Isha Vidhya is a program that improves education in India.

Throughout his life, Jaggi Vasudev has also written some works, most of which being poetry. Some of his most famous works are listed below.

Inner Engineering: A Yogi’s Guide to Joy
Adiyogi: The Source of Yoga
The Mystic Eye
Circus of the Mind
Don’t Polish Your Ignorance...it May Shine
Emotion: The Juice of Life
Why Suffering

Jaggi Vasudev married Vijayakumari in 1984. Together, the couple has one daughter: Radhe. Sadly, the marriage ended with Vijayakumari's death in 1996. Vasudev has not remarried since.